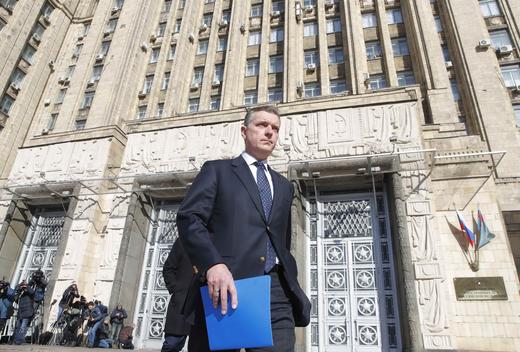 The head of the UK’s military research centre says it cannot yet verify whether the novichok nerve agent used against former spy Sergei Skripal in Salisbury was produced in Russia, prompting one German politician to ask, “If one forces nearly all NATO countries into solidarity, shouldn’t one have certain evidence?” Prime Minister Theresa May says Britain is still looking for a “proportionate way” to respond to the Russian threat. Russia’s deputy foreign minister suggested that the UK orchestrated the Skripal attack because it needed a provocation that would allow it to justify high military spending, and the Foreign Ministry maintains that the British accusations are baseless. President Vladimir Putin is hoping that this week’s extraordinary meeting of the Organisation for the Prohibition of Chemical Weapons (OPCW), the global chemical weapons watchdog, will clear things up; Kremlin spokesman Dmitry Peskov is expecting an apology from Britain. “The idiocy has gone too far,” he said. Gazprom is poised to settle its long-standing antitrust case with the European Union after agreeing to price reforms and some anti-monopoly measures. A staggering 96% of state tenders in Russia last year were uncompetitive; losses from uncompetitive tenders over the past 3 years were estimated at $9.4 billion.

Opposition leader Alexei Navalny will create a new political party – if he can manage to register it under his name; his efforts in this vein have been blocked numerous times in the past. A young activist from Krasnoyarsk is facing a 1.5 year jail term for storing provocative memes in a private social media album; she says the case against her is political and connected to her work in organising a local demonstration last year. Moscow authorities have denied permission for a protest against sexual harassment. Putin announced an agreement that will hasten the delivery of S-400 missile systems worth $2 billion from Russia to Turkey, at Turkey’s request. Putin made a special trip to Turkey’s Akkuyu nuclear power station to mark the official start of construction on the $20 billion plant, which will eventually cover 10% of Turkey’s energy usage.

A former Russian envoy to NATO says the alliance has crossed a “red line” in its expansion. Facebook has removed hundreds of accounts and pages associated with Russia’s “troll factory”. This piece wonders whether Putin is a CIA agent, because he has contributed so much to “the weakening of Russia’s economy and human capital base”.