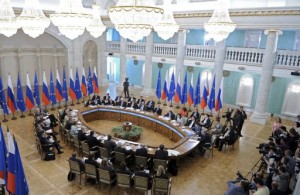 The second trial of five men suspected of involvement in the killing of journalist Anna Politkovskaya six years ago began in Moscow yesterday, as a lawyer for her family said there is ‘no chance’ that the name of the person who ordered her killing would be revealed.  Lawyers for the accused men are demanding a jury trial.  Politkovskaya’s direct criticism of Vladimir Putin and her wide reporting on corruption and rights abuses has made the trial a symbol of Putin’s attempts to stifle dissent, says Reuters.  Prominent gay rights activist Nikolai Alexeyev is calling for a more tolerant society and an end to official ‘homophobic rhetoric’, following a murder in Kamchakta last week that was thought to be related to the victim’s sexuality.  This was the second suspected homophobic murder in Russia in less than a month, rousing speculation that the Putin regime’s anti-gay laws are to blame. ‘It’s going to get worse,’ Alexeyev said.  A woman has been detained by police for offering a Kremlin job to a businessman for $3 million.  Moscow Mayor Sergei Sobyanin may resign from his post in order to make himself available for early re-election in September of this year, instead of the projected date of 2015, giving him ‘a significant advantage over his rivals’.  Amendments to the Labour Code to restrict employee leasing are supported by labour unions due to increased worker security, but could negatively affect businesses and the economy, critics say.

Vladimir Putin is hosting an E.U.-Russia summit in Yekaterinburg this week, opening with a dinner for council heads where an agenda of Syria, energy cooperation and visa issues was indicated, with an official program due later today.  This piece warns the European Union against going ahead with a visa-facilitation agreement that would make European visas easier and cheaper for Russians to acquire, because of the knock-on effects for Russian bureaucrats which would ‘reward them and Putin for their increasingly repressive policies’.  Human Rights Watch is calling on the E.U. to raise rights issues such as the ‘foreign agent’ law being imposed on NGOs.  Russia’s Union of Organic Farming is seeking a deal to supply the E.U. with organic produce.  A new draft bill would permit random, unscheduled checks of NGOs by the Justice Ministry.  Wikileaks cables indicate that Russia has long promised never to send S-300 missiles to either Syria or Iran, but uses the threat of doing so as a bargaining chip.

Gazprom is lifting requirements for Russian buyers to stop major industrial clients from switching to lower-cost providers like Novatek.  The NBA is welcoming Mikhail Prokhorov’s efforts to boost the popularity of basketball in Russia.

PHOTO: Participants attend the European Union-Russian Federation (EU-Russia) Summit in Yekaterinburg June 4, 2013. The European Union will ask Russia to delay the introduction of a decree allowing authorities there to collect data on European airline passengers because of doubts over whether the new rules respect EU law, EU officials said on Monday. REUTERS/Mikhail Klimentyev/RIA Novosti/Kremlin