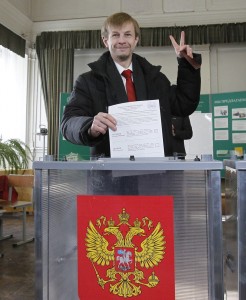 Supporters of Yaroslavl Mayor, Yevgeny Urlashov, say that his detention on suspicion of bribery is likely to be politically-motivated, linked to Urlashov’s abandoning his former membership of United Russia, and their desire to take out a popular opponent, who ‘scored a stunning landslide victory’ to win his post last year.  Opposition figure Ilya Yashin commented, ‘The arrest of Urlashov shows once again that it is impossible to reform the system from within.’  Prosecutors have asked that the posthumous tax evasion case against high-level corruption whistleblower Sergei Magnitsky be closed, and that his former boss, William Browder, be sentenced to nine years in absentia.  Officials are playing down threats by Chechen militant leader Doku Umarov, and pledging safety for next year’s Winter Olympics in Sochi.  Security forces are being contracted from all over the world in order to ensure that the games will be safe.  Ecologists are concerned that increased tree-cutting in protected forest areas, under ‘vaguely worded’ logging rules, could destroy vulnerable ecosystems in Russia.  Russia’s oil shipments to Europe have hit a ten-year low.

President Vladimir Putin has signed into law new measures to ban adoptions by same-sex couples.  Putin ignored researchers’ complaints, and announced that reforms to the Academy of Sciences will go ahead (RIA Novosti has background of the dispute). He is also calling for more transparency among Moscow airports, in a bid to increase the effectiveness of government spending and encourage private investors.  A specialised arbitration court for intellectual property cases has opened in Moscow.  The Audit Chamber says that trade barriers and discrimination are still a problem for domestic exporters, despite Russia’s accession to the WTO.  Kyrgyzstan has agreed it will sell its shares in Dastan, a torpedo production factory, giving purchasing priority to Russian investors.

Edward Snowden is still in Moscow, and looks to be running out of asylum options.  All of Russia’s tabloid eyes are on the newly single President: ‘Any girl would marry Putin.’

PHOTO: Independent mayoral candidate Yevgeny Urlashov casts his vote at a polling station in the city of Yaroslavl, some 250 km (160 miles) northeast of Moscow in this April 1, 2012 file photo. REUTERS/Denis Sinyakov/Files