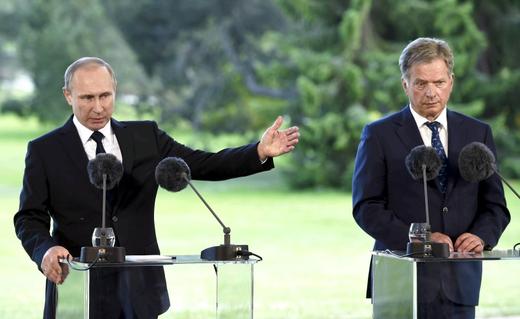 The European Union has again extended its anti-Russia sanctions (initially imposed in July 2014 and intended to last for just one year) until January of next year.  Prime Minister Dmitry Medvedev says Russia cannot increase spending to help the economy out of recession, as had been advised by some of the Kremlin’s economic advisers, as it creates too high of a risk of inflation. ‘This is dangerous,’ he said.  Medvedev also slammed Russia’s poor cross-border trade ranking in a new World Bank Group report as ‘unacceptable’.  Regarding the restoration of trade and economic relations with Turkey, Medvedev says that Russia will not alter its economy to fit the interests of others, even a major trade partner like Turkey, and that the process of normalisation with be slow.  President Vladimir Putin is threatening to retaliate by moving troops closer to the Finnish-Russian border if Finland joins NATO.  Reuters explains why Serbia cannot turn to Russia or to NATO.  Deputy Foreign Minister Sergei Rybakov says US sanctions ‘demonstrate clearly the essence of its policies,’ which, he says, is to punish Russian companies that want to help Syria fight terrorism.  The Washington Post wants the US to ‘push back more against Russian provocations’.

Over a third of Russians believe that the upcoming State Duma elections will be rigged, says a Levada Centre poll.  Performance artist Pyotr Pavlensky says the feminist punk collective Pussy Riot was responsible for inspiring him to begin performing publicly, in combination with the ‘clerical ideology’ that was imparted to him during his school years.  Vladmir Putin’s book about judo, ‘Gentle Way’, co-authored by his close friend and publishing house head Arkady Rotenberg, is to be distributed to millions of Russian schoolchildren.

The Russian Olympic Committee (ROC) is appealing a ban on its track-and-field team from competing in next month’s Olympics in Rio de Janeiro.  Russian tennis player Svetlana Kuznetsova says she believes that the decision to ban them in the first place was politically motivated. ‘Suddenly everything has to go against Russia. In Russia, they’re all bad, and all the world is good.’  Eight people died after a Russian plane crashed in Siberia.