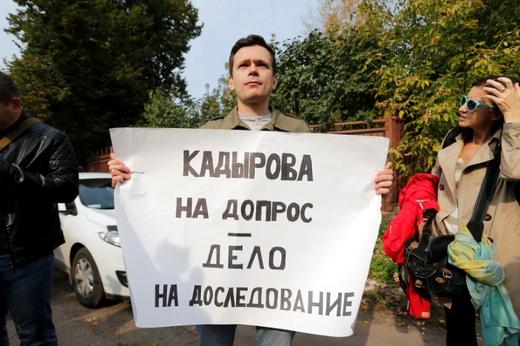 TODAY: Putin suspends nuclear deal with US made in 2000, citing ‘unfriendly actions’ as US cuts off Syria dialogue with Russia, Foreign Ministry says US is to blame for current situation; Western coverage of Syria wildly different to Russia’s version; rouble hits 2016 high on oil prices; Nemtsov case in court; blogger fined for extremism.

President Vladimir Putin suspended a 16-year-old deal with the US to reduce plutonium stockpiles, citing numerous ‘unfriendly actions’ and ‘a threat to strategic stability’. A former US ambassador who was in office when the deal was originally signed said the move is strange given the danger of plutonium falling into terrorist hands.  The suspension is at least ‘powerfully symbolic’ and could lead to other cooperative deals with the US unraveling, analysts say.  This piece sees Russia’s latest Syrian assaults contributing to its growing image as ‘a dominant force in the Middle East’; this piece wonders why Russia is ‘putting itself on the wrong side of history’ in allying with Bashar al-Assad.  For its part, the US has cut off dialogue with Russia on its Syria accord as promised, and is giving up on the possibility of restoring a ceasefire.  The Foreign Ministry sees the US’ actions as resulting from its desire to ‘make somebody else responsible’ for the humanitarian situation in Aleppo which, according to spokeswoman Maria Zakharova, is a result of its own non-compliance on Syria agreements which have apparently caused ‘regrouping’ of militants.  The Guardian says that, going on Russian coverage of Syria, it could very well be covering an entirely different war. The head of the Levada Centre explained it thus: ‘The problems that evoke an angry reaction in the western media, like the developments around Aleppo and the destruction of the humanitarian convoy, are almost not noticed here because they’re not on television, or they’re shown as anti-Russian propaganda.’

The rouble has hit a 2016 high against the dollar this month, with oil prices holding at $50 a barrel.  Russia’s population is still in major decline, says the Moscow Times, due to several cultural and social factors including a high rate of abortion.  The Justice Ministry is drafting legislation to provide measures to the Federal Penitentiary Service that would reduce the risk of prisoner riots.  This piece charts the history leading up to the final decision this week, following much toing and froing, to privatise state oil giant Rosneft.  The murder case of Boris Nemtsov is being heard in court this week, with the prosecutor yesterday alleging that the men accused of carrying out the crime were paid at least $240,000.

Anton Nosik, a popular blogger and internet entrepreneur, has been found guilty of extremism and fined $8,000 for a 2015 post about Syria that the court alleged incited racial hatred.

PHOTO: Ilya Yashin, a prominent figure in the People’s Freedom Party or PARNAS, holds a placard reading ‘Bring Kadyrov in for questioning. Complete the investigation’, outside the Moscow military district court during a trial of five men suspected of involvement in the killing of opposition figure Boris Nemtsov, in Moscow, Russia, October 3, 2016. REUTERS/Maxim Zmeyev