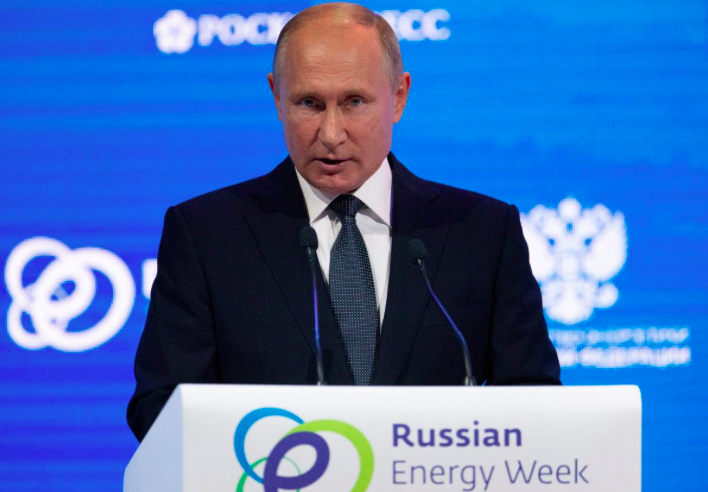 Speaking at the Russian Energy Week forum in Moscow, Vladimir Putin slammed Bulgaria for dumping the South Stream gas pipeline, saying he hoped that Europe would not follow suit with Nord Stream 2 by demonstrating “its weakness and inability to protect its interests”. In spite of US pressure on the EU to reduce gas pipeline imports, Russia will export a record volume of gas this year, and aims to become the world’s number one exporter thanks to technology currently in development. Russia’s gas exports could exceed 200 billion cubic metres this year (its previous record was 194). Vladimir Putin said that LNG from the US is uncompetitive in Europe. Oil production is also likely to increase, he said, to address shortages. Putin said he agreed with US President Trump that current oil pries are too high, but that this is the fault of the US’ sanctions against Iran. Speaking on the sidelines of the Moscow Energy forum, Putin fought back against the theory that former spy Sergei Skripal was “some kind of human rights activist”, countering that Skripal was a “traitor” and a “scumbag”.

Seemingly in response to concerns over recent prosecutions for people who reposted Internet memes, President Vladimir Putin has proposed a softening of the punishment for first-time offenders who incite hatred, proposing administrative instead of criminal prosecution. Meduza proposes a summary of the effects of the amendments, which were made in defiance of the Presidential Human Rights Council’s advice (which called for the complete decriminalization of “extremist speech”), including the likelihood of “a wave” of new misdemeanour charges, tightened restrictions for media outlets, and using other legal loopholes to prosecute extremism suspects. Putin has also now signed into law the controversial new bill to raise the retirement age. The UK is accusing Russia’s GRU military intelligence unit of being behind a series of cyber attacks in various Western democracies, casting the agency as “a pernicious cyber aggressor which used a network of hackers to spread discord across the world”. The latest regional reshuffle affects the long-term governor of St Petersburg, whom Vladimir Putin has replaced with his aide Alexander Beglov.

Putin believes that the demilitarised zone set up by Russia and Turkey in Syria’s Idlib is effective and that no further military actions will be required in the region. He also claimed that all allegations of Russian meddling in US elections have been fabricated by Trump’s domestic opponents.