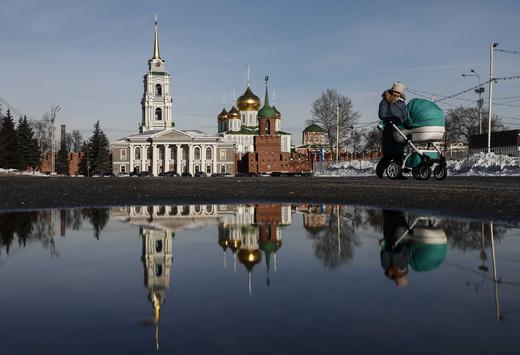 President Vladimir Putin has been presented with a list of around a dozen Russian businessmen who currently stay in the UK to avoid legal responsibility in Russia, in the hope that their cases might be reviewed. It is not clear whether this is related to the news that Russian oligarchs suspected of corruption in the UK will be forced to explain any assets over $70,000, after the Security Minister vowed to “make the environment that you live in difficult“. A seasoned Russian professor was dismissed from his job after the publication of a letter he wrote to the Prime Minister complaining of low wages. Anticorruption, pro-democracy opposition activist Konstantin Sinitsyn has been found dead in the entranceway of his St Petersburg apartment building; authorities believe the motive was robbery. The Central Bank fined “much more than 10 banks”, many of them listed among the country’s top 30 credit institutions, billions of rubles last year for conducting questionable operations. The economic outlook for Russia this year sees gradual improvement and potential growth of 2%. Tens of thousands gathered across the country to mark the 75th anniversary of the Battle of Stalingrad which saw the defeat of Nazi forces in the city; some who rallied held signs protesting the IOC’s requirements that Russians compete in neutral uniforms at this year’s Olympics.

Kremlin spokesman Dmitry Peskov has made a rare public apology following a warning from the Central Election Commission about the potential “electioneering” in his statements about Vladimir Putin’s presidential candidacy (such as, perhaps, his assertion that Putin is beyond political competition). Putin’s annual state-of-the-nation speech will be delayed until closer to the March vote to allow him to lay out his priorities for his next presidential term – or, as one Kremlin political consultant put it, “a kind of picture of the future over the next 6-10 years”. The New York Times documents, entertainingly, some of the President’s arguably unnecessary campaign trips which “are not meant to address issues”. The BBC writes inquisitively about the FSB’s powers and its close ties to Vladimir Putin who, some say, has restored the power of the KGB in Russia by forming close ties between the intelligence service and the government.

The US military has outlined new proposals to expand its nuclear capabilities by developing smaller atomic bombs to dissuade Russia from using nuclear weapons. The Foreign Ministry is concerned that the “confrontational” new US stance is too vague and could be seen as warmongering, critics say the new measure could increase the risk of miscalculation between the two countries.  This Bloomberg take argues that Russia “isn’t interested in any kind of resolution to the conflict [in Syria] even as it plays along with the peace process,” and suggests that the Kremlin’s ideal would be for the talks to go on for decades. Syrian rebels shot down a Russian warplane, killing its pilot.

PHOTO: A woman pushes a pram near the Kremlin in Tula, south of Moscow, Russia January 26, 2018. REUTERS\/Maxim Shemetov