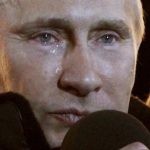 Demonstrators are planning to gather in Moscow this evening (with a reported 12,000 police and troops ready to contain them) after a tearful Vladimir Putin, flanked by his protégé Dmitry Medvedev, celebrated election victory yesterday – a victory he claims is the result of ‘an open and fair struggle’.  This contrasts sharply with the views of international observers, domestic observers, and opposition figures alike.  The European OSCE observer mission announced ‘serious problems’ with the election and ‘clearly skewed’ results.  Alexei Navalny responded that ‘[h]e who has declared himself president is a usurper.’  Putin’s comments also sharply contrasted thousands of allegations of voting fraud, including ‘carousels’ bussing groups of voters around various polling stations to cast numerous votes, and ballot fraud.  ‘Some monitoring efforts were simply shut down.’  Golos says that 5,000 reports of violations have been registered thus far, as Putin’s campaign manager talks of the cleanest election ‘in the entire history of Russia’, whilst even the Central Elections Commission says that over 800,000 ballot papers have been recognised as invalid, as head Vladimir Churov denies the mass removal of observers from polling stations.  You can view voting image galleries at the Guardian and the BBC.

Protest organiser Sergei Parkhomenko says Putin is effectively ‘declaring war’ on his opponents.  Opposition figures including Navalny, Ksenia Sobchak and Sergei Udaltsov condemned widespread fraud yesterday, claiming that this election was even more rigged than the previous.  ‘This is not an election; it’s a shame,’ said Udaltsov.  On its own, the high win margin Putin is claiming – roughly 64%, depending on your source  – ‘will raise the specter of major fraud’.  Polls show Communist Gennady Zyuganov in second place with 17.37% of the vote, Prokhorov in third with 8%, Zhirinovsky third and Mironov fourth.  Mikhail Prokhorov’s cheerful post-election reception ‘resembled a cocktail party more than a victory gala’, says this report, which offers a round-up of failed candidate responses.  The WSJ gathers responses on the results from all of the candidates.  Whilst many countries condemn the news, Putin’s congratulators thus far include Syria, Germany’s Foreign Minister, China, and Azerbaijan.  Russia isn’t on the verge of a ‘middle-class revolution’ – Kremlin opponents come from all walks of life, says Masha Gessen.  Prokhorov’s next move will be the formation of a middle-class political party. RFE/RL interviews Edward Lucas on the election aftermath: ‘This is going to be messy.’

Offering a couple of election concessions to Kremlin opponents, Dmitry Medvedev has called for the prosecutor general to study the legality of a number of criminal cases, including the imprisonment of Mikhail Khodorkovsky and the refusal to register the opposition movement, Parnas.  Russia has expressed its willing to restore diplomatic relations with Georgia.  The State Duma has adopted three new presidential bills at first reading: one to facilitate the registration of political parties, another to reintroduce gubernatorial elections, and another to remove the clause that parties need signatures in order to participate in elections other than that for president.

PHOTO: Russian Prime Minister Vladimir Putin, who claimed victory in Russia’s presidential election, tears up as he reacts at a massive rally of his supporters at Manezh square outside Kremlin, in Moscow, Sunday, March 4, 2012. (AP Photo/Ivan Sekretarev)