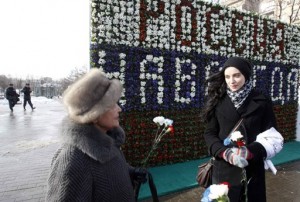 Following a meeting with his Ukrainian counterpart, Viktor Yanukovych, President Vladimir Putin said that there are ‘no closed issues’ between the two, and indicated that he wanted Ukraine to join Russia’s Customs Union. Yanukovych said that nothing immediate was planned, but acknowledged ‘economic losses’ and ‘negative processes’ stemming from Ukraine’s abstention.  There was no mention of the two having resolved their dispute over the current price that Ukraine pays for Russian gas.  The editors-in-chief of both Gazeta.ru and Kommersant-FM have both resigned, but deny that their resignations are the result of political pressure over editorial policy.  On the 60th anniversary of the death of Josef Stalin, many have pointed out the ways in which the Soviet leader’s regime is still present in Russia today. ‘Some say Stalin even lives in the language and mentality of the country’s officials, whom critics accuse of a Stalin-like tendency to use violence to solve problems.’  Most Russians are against the idea that Volgograd could take up its former name, Stalingrad.  Ann Applebaum talks to RFE/RL about current perceptions of Stalin: ‘I think to imagine that what Stalin achieved was some kind of triumph is to ignore how Russia could have developed differently.’

Moscow Deputy Mayor Andrei Sharonov defends Moscow against allegations that its financial climate is too risky for investors.  The question of who will succeed Sergei Ignatiev as head of the central bank has ‘gripped Russian markets’, says the FT.  Rusal reported a $55 million loss for last year and revealed plans to shrink output for the next three years, sparking speculation that this could lead to worker unrest in the regions.  According to new Forbes rankings, businessmen rumoured to have close ties with Vladimir Putin are getting richer every year.  Jailed Pussy Riot member Maria Alyokhina has had her request for a suspended sentence refused by the Perm Regional Court.

The pilot issue of a glossy lesbian magazine has gone on sale in Russia, with the aim of addressing what its editor calls the LGBT community’s ‘information blackout’.  A suspect has been detained in connection with the January acid attack on Bolshoi director Sergei Filin.  Moscow State University is back among the world 50 most reputable institutions of higher learning, says the Times.

PHOTO: A passerby receives free flowers near a flower arrangement spelling the words “Russia forever” in central Moscow March 4, 2013. The flower arrangement was erected to mark a year since President Vladimir Putin was elected to his third term in a presidential election on March 4, 2012. REUTERS/Sergei Karpukhin