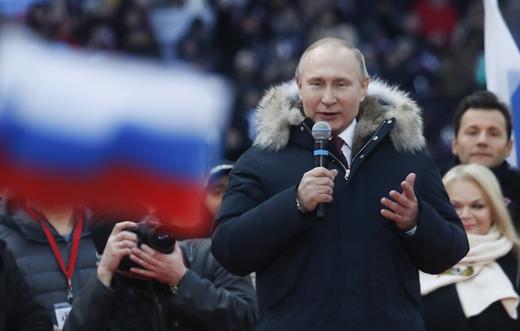 The For Strong Russia rally in Moscow, held on Saturday in support of President Vladimir Putin’s candidacy for re-election, drew a crowd of 130,000, claims the Interior Ministry. The police clarified that 80,000 attended the event, with 50,000 watching outside the stadium on giant screens; but some reports claimed that thousands were forced to attend, through pressure exerted via their school or employer, and that some were paid. After US President Donald Trump moved to extend existing sanctions against Russia (initiated in 2014 as a result of Russia’s actions in Ukraine) for another year, Kremlin spokesman Dmitry Peskov said the sanctions are illegal, and are affecting the entire world. The Kremlin also rejected US allegations that Russia has been developing destabilising weapons systems for over a decade, and Peskov defended the bellicose state of the nation address given by Putin last week, saying that Russia has no plans “to get dragged into any arms race”. NATO also spoke out against Putin’s rhetoric as “unacceptable”. Putin told supporters in Kaliningrad that he would reverse the collapse of the Soviet Union if he could.

Energy Minister Alexander Novak has vowed that natural gas transits to Europe via Ukraine are not at risk unless Gazprom and Naftogaz fully terminate their existing contract. The problem is that Gazprom has just announced that it wants to do exactly this, following the Stockholm arbitration court’s order last week for it to pay Naftogaz $2.5 billion. Putin vowed never to extradite the 13 Russians indicted by the US for election meddling, and repeating his position that they didn’t act on behalf of the government and that he still doesn’t actually know what they specifically did. The business network owned by Yevgeny Prigozhin, often referred to as “Putin’s chef” and one of those accused, has lost billions of rubles in Defence Ministry contracts over the past year, suggesting that any contacts he previously had with them are drying up.

Activists are seeking signatures for an online petition against the government’s plans to destroy large numbers of stray cats and dogs in major cities in advance of the World Cup soccer championship. Orthodox Church head Patriarch Kirill is distressed by Bulgaria’s portrayal of Russia’s role in the 1877-1878 Russo-Turkish war.

PHOTO: Russian President Vladimir Putin delivers a speech during a rally to support his bid in the upcoming presidential election at Luzhniki Stadium in Moscow, Russia March 3, 2018. REUTERS/Maxim Shemetov