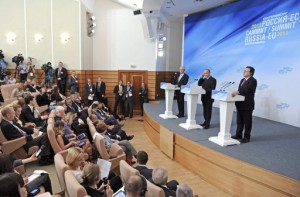 Russian and European officials met at the E.U.-Russia summit in Yekaterinburg yesterday, debating issues such as the potential liberalisation of visa rules (unpopular among European Council officials) and a European version of the Magnitsky Act (dismissed by Russia’s E.U. Ambassador).  Speaking at a joint news conference following the summit, President Vladimir Putin made a number of statements on topical issues.  On Syria, Putin warned against foreign military intervention, insisting that it would only worsen current conditions.  He said that Moscow had not yet completed its delivery of S-300 missiles to the Syrian government which was promised ‘several years ago’, and said that Russia does ‘not want to disturb the balance in the region’.  He voiced his support for a ban on foreign adoptions by same-sex couples, protesting that Europe had ‘worn me out’ with protests in support of gay rights.  He defended Russia’s legislation of gay rights, saying that it is ‘quite liberal and there is no discrimination’.  Regarding the controversial emigration of liberal economist Sergei Guriev, Putin said that ‘no one was threatening’ him, and that he could come back ‘if he wants to come back’.  But Putin stopped short of being able to guarantee Guriev’s safety if he returned. ‘What, is there is some basis for imprisoning him? I don’t know anything about this.’  Guriev says he will not return to Russia.  Rights campaigner Lyudmila Alexeyeva says Russia is in danger of shifting from authoritarianism to a totalitarian state: ‘Let’s remember what the world felt like when our country was the Soviet Union.’  Inflation is currently accelerating at its fastest pace in almost two years.

Independent elections watchdog Golos has been fined $10,000 for failing to register as a ‘foreign agent’.  Moscow Mayor and Putin ally, Sergei Sobyanin, will ask the President to declare early mayoral elections in a move that is widely expected to help him win re-election and stay in power until 2018, as opposition leaders said the move would ruin their chances of presenting a viable rival candidate.  Brian Whitmore considers possible scenarios for Sobyanin’s would-be opponents, Mikhail Prohkorov and Alexei Navalny.  A Levada Center poll indicates that roughly 40% of Russians have heard of Navalny.  Alexei Kozlov, the jailed husband of activist Olga Romanova, has been released.  The five suspects in the murder of Anna Politkovskaya have been granted the right to a jury trial.

Competition is forcing Gazprom to cut its European prices.  A law reform officer explains the abuse of Interpol’s procedures for political purposes, and how this relates to Russia’s recent attempt to have William Browder added to its wanted list. ‘It has been portrayed as a snub to Russia, but it was very much to be expected.’  Is Hollywood actor Steven Seagal in the running to become a spokesman for a Soviet-era weapons factory?