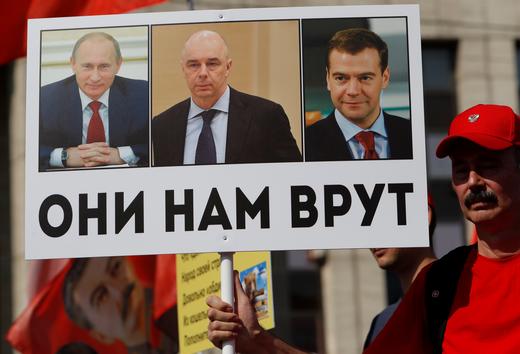 Russia has resumed air strikes on Syria’s Idlib. Its navy has sent its largest naval deployment to the Sea of Japan since the Cold War, to take part in missile drills. RFE/RL has compiled some information on the massive upcoming Vostok War Games, comparing the numbers with those of past games. The Defence Ministry is collecting donations to build an Orthodox cathedral in Moscow dedicated to “the spirituality of the Russian army”. Engine maker Energomash signed a new supply contract with the US, in spite of hints that Russia might stop supplying rocket engines to the US as a tit-for-tat move against sanctions. 84% of company owners in Russia are ready to sell part of their assets due to risk or inefficiency. Roscosmos is claiming that an air leak on the International Space Station could have been caused by sabotage. “There were several attempts at drilling.”

Roskomnadzor is demanding that Google respond to its complaint that it is interfering with this weekend’s regional elections by allowing opposition leader Alexei Navalny to buy advertising space on YouTube for his videos, in which he urges people not to vote for officials who support pension reform. Roskomnadzor’s deputy head claimed that YouTube “acts as a link in the chain for propaganda of antisocial behavior during Russian elections.” An investigation by RBC news found that almost 1 in 50 candidates in the elections has a criminal record for theft, assault, or hooliganism. Russians are luring their citizens to become informants in their bid to gain inside information about domestic opposition. Investigative newspaper Novaya Gazeta has launched a crowdfunding campaign to keep its content free.

The director of RUSADA, the anti-doping agency, is not optimistic about the organisation’s chances of being reinstated by the World Anti-Doping Agency this month, mainly because Russian authorities have neglected to acknowledge the findings of WADA’s report uncovering a state-run scheme to conceal positive doping tests.

PHOTO: A man holds a sign depicting Russian President Vladimir Putin, Finance Minister Anton Siluanov and Prime Minister Dmitry Medvedev during a protest against a proposed increase of the retirement age in Moscow, Russia, September 2, 2018. The sign reads, “They lie to us.” (Reuters/Sergei Karpukhin)