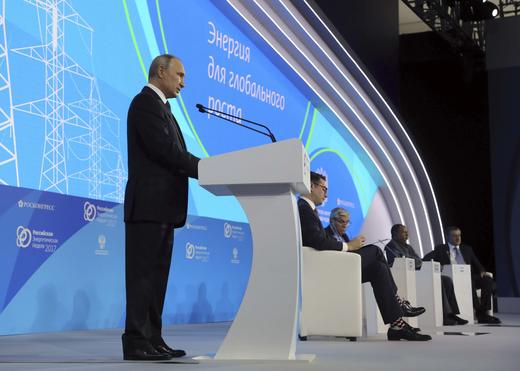 Speaking at the Russian Energy Week Forum in Moscow yesterday, President Vladimir Putin made statements about a variety of issues. The Moscow Times picked some of his most notable comments, with topics including his indecision about whether or not to run for re-election next year (surely he was joking when he said he has “not decided yet who I will stand against”?), relations with the US, North Korea, and electric cars (he’d drive a Tesla, but thinks gas-run cars are better for the environment). Relations with the US have “become hostage to the internal political situation” there, he says, but Russia has friends in the US who will mend ties and that it is meanwhile “patiently waiting until this process in the internal political life in America will end”. He also pinpointed Russia’s greatest diplomatic strength as its never resorting to double dealing. “We are always honest in relations with our partners and openly explain our position.” Russia will support a nuclear deal with Iran whether or not the US continues with its support. Moscow will retaliate against Canada’s copying of the “odious” Magnitsky Act which, it says, will result in “further derailing of Russian-Canadian relations”.

The City of St. Petersburg is, for the first time, refusing to authorise a decade-old annual commemorative event for murdered journalist Anna Politkovskaya. Jailed opposition leader Alexei Navalny is calling for nationwide demonstrations this Saturday for Putin’s birthday, despite earlier warnings from the Kremlin that unauthorised protesters would be detained. Navalny’s campaign coordinator in has also been jailed.  The European Court of Human Rights has ordered Russia to pay compensation to human rights activist Stanislav Dmitriyevsky, ruling that his conviction of hate crime violated his right to freedom of expression. What has motivated the King of Saudi Arabia to choose this moment to visit Moscow (the trip has been rescheduled several times in the past 2 years)? Gazprom Neft has discovered a new oil field off of Sakhalin.

The FSB is looking to ban anonymous SIM cards and anonymity on instant messengers. If you were wondering which Russian city has the most crooked streets, wonder no further.