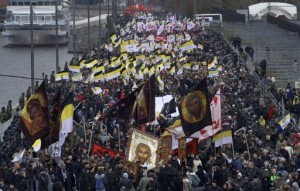 A reported 6,000 nationalists (‘from moderate to far-right’) gathered in Moscow for an anti-Kremlin march yesterday, with a small group detained for ‘trying to fire a flare gun at a helicopter’.  The march was a ‘highjacking’ of the National Unity Day holiday, created by President Vladimir Putin, and a protest against the President for ‘ignoring the rights of ethnic Slavs’.  RFE/RL has video of the march and arrests.  In his first appearance since rumours of his ill health, Putin marked his national holiday at a Moscow ceremony.  Putin’s industrial support is being tested by hunger strikes over unpaid wages in Sverdlovsk this year, says Reuters.  The Guardian interviews Alyona Korolyova, whose girlfriend was kicked in the head during an organised anti-gay attack on a Moscow bar last week, highlighting a new violent trend of homophobia.

Prosecutors have begun their investigation into the Left Front opposition party over accusations of extremism.  The Right Cause party (also opposition-oriented) is planning to unveil a new political approach this week following a party resolution.  Orthodox Patriarch Kirill has warned against a return to the ‘Time of Troubles’.  Will plans to replace guns and troops with ‘ski slopes and sandy beaches’ by building resorts in the North Caucasus succeed?  Foreign Minister Sergei Lavrov is making a renewed diplomatic effort to address the Syrian crisis during his visit to Cairo.

On Vladimir Putin’s anti-smoking and drinking public health drive, designed to revive population growth.  A trio of Japanese companies are considering building a natural gas pipeline from Russia’s Sakhalin island to fill the gap in the energy market created by the Fukushima disaster.