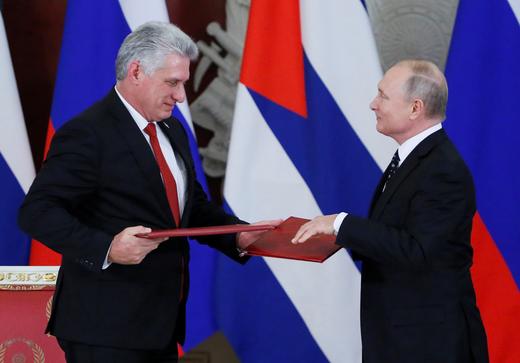 At a ceremony marking the centenary of Russia’s military intelligence agency the GRU, President Vladimir Putin praised Russia’s spies for “professionalism, daring and decisiveness”. He also called for the GRU to have its traditional name restored. It was renamed in 2010, when the word “intelligence” was removed. “It’s unknown where the word ‘intelligence’ went,” he said. The latest round of US sanctions against Russia’s financial and energy sectors come into effect tomorrow, with serious disruptions expected, but Russia’s enormous resource base means that there is no shortage of investments and new deals, says the FT. Russian state oil producer Zarubezhneft has exited projects in Iran due to the sanctions. Aluminium giant Rusal, heavily hit by sanctions, will relocate from Jersey to Russia. An in-depth piece on Rusal owner Oleg Deripaska looks at the past two decades of the oligarch’s attempts “to buy respect in the West” and his current scramble to undo the effects of sanctions.

Nationalist group supporters marched in Moscow over the weekend to mark National Unity Day, leading to at least six arrests. Some smaller marches took place in St Petersburg (where police “seemed to outnumber the protesters”) and Yekaterinburg. Putin met with his Cuban counterpart at the Kremlin, with both sides vowing to strengthen ties and denouncing US meddling. Putin will meet with US President Donald Trump on the sidelines of the G20 summit in Argentina next month.