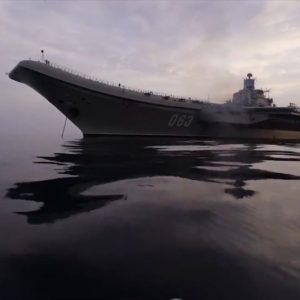 According to defence ministry reports, Moscow has begun its withdrawal of forces from Syria, beginning with the return of the aircraft carrier Admiral Kuznetsov and its group from the Mediterranean Sea back to Russia.  However, ‘this is not Russia’s first “withdrawal” from Syria. In March 2016 President Putin announced the start of a pull-out. Some warplanes were flown out.  But Russia’s military role continued…’ warns the BBC.  As part of the military modernisation drive, the Russian Air Force will receive five new Sukhoi T-50 fighter jets in 2017 and six new Ka-27M helicopters will enter into service in the Northern Fleet’s Air Force and Air Defense Army next year.

U.S. officials have apparently intercepted communications which show Kremlin officials celebrating Donald Trump’s victory in the presidential elections, indicating, despite strong assertions to the contrary, that the Kremlin was not indifferent to the outcome of the election.  Some of the officials in question, the U.S. believes, may have even been aware of the Russia-led hacking campaign.  The U.S.’s leading intelligence official, James Clapper, has told a hearing that he is ‘even more resolute’ than before in his belief that Russia was responsible for cyber attacks on Democrats during the 2016 election campaign.  ‘Russia is a full-scope cyber-actor that poses a major threat to US government, military, diplomatic, commercial and critical infrastructure,’ the testimony prepared for the hearing states.   Clapper has pledged he will explain why he believes the Kremlin chose to meddle in the election process.  Apparently a number of Russian officials believed to be responsible for hacking have now been identified and their names presented to President Barack Obama and his successor Donald Trump.  Itar-Tass offers the testimony of one expert who disputes the FBI’s conclusions on Russian hacking.  This article predicts that 2017 will see Russian shares soar.

Four more lives have been claimed in Siberia following the apparent drinking of an alcoholic cocktail, after the poisoning epidemic in Irkutsk which claimed 80 lives in December.  Stories like that don’t do wonders for the image of Siberia, so it’s little surprise cities such as Yekaterinburg are reportedly trying to assert their Urals-ness.  Find out here how security officials have managed to blame problems at Kaliningrad’s Khrabrovo airport (where an Aeroflot plane overran the runway this week) on the West.

PHOTO: The Russian aircraft carrier, the Admiral Kuznetsov, and other ships in Russia’s fleet will reportedly begin the withdrawal from Syria. (RFE/RL)