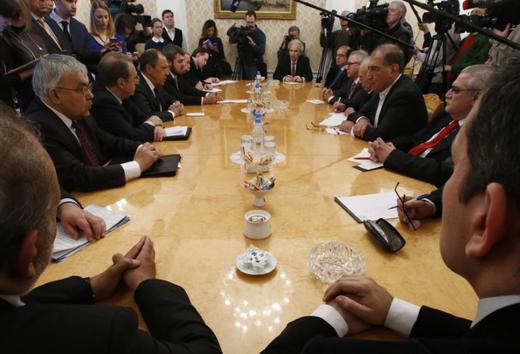 U.S. President Donald Trump’s positive statements about his desired relationship with Russia are spurring investment, as traders predict that the geopolitical risks surrounding the country will decrease and that sanctions will be lifted.  Trump defended Vladimir Putin against FOX News’ protestations that he is ‘a killer’ saying, ‘what, do you think our country’s so innocent?’  Trump also said the U.S. will work with both Ukraine and Russia to resolve current violence in eastern Ukraine.  Former Russian Energy Minister Igor Yusufov gushed about the ‘fantastic’ qualities of new U.S. Secretary of State and former ExxonMobil CEO Rex Tillerson.  The European Union is planning to prolong existing sanctions against Russian officials for another six months.  Deputy Prime Minister Dmitry Rogozin repeated what many other Russian officials have said about European sanctions – that they are not wreaking the havoc that was intended.  Foreign Minister Sergei Lavrov says that imposing tit-for-tat sanctions against the E.U. was ‘honest’ action.

Anti-corruption campaigner and opposition leader Alexei Navalny has opened his first regional office for a presidential bid, in full knowledge that ‘the Kremlin will do its best not to let me participate in the election‘.  Vladimir Zhirinovsky, the leader of the LDPR party, will also run (for the sixth time). The children’s rights commissioner has a portrait of Stalin in his office.  According to this map published by the Independent, more than 7,000 NATO troops are currently stationed along the border with Russia, a deployment which the Kremlin has described as ‘truly aggressive’.

A woman in Belgorod is facing criminal charges (of disrespecting the feelings of religious people) for lighting a cigarette using a church candle.  The Foreign Minister says Western journalists (specifically Reuters journalists) are lying about the censorship and harassment they say they face from Russian authorities.