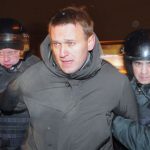 The opposition claim that 20,000 people (police estimate 14,000) gathered in Moscow’s Pushkin Square last night for a rally that started peacefully and ended with riot police dispersals and detentions.  250-550 people were detained and subsequently released, including opposition figureheads Alexei Navanly (who tweeted from a police van after his arrest) and Sergei Udaltsov.  The BBC has footage of Navalny’s detention and a brief interview with him, as well as clips of protesters being ‘roughly dispersed’ by riot police.  The crowd chanted ‘Russia without Putin’ and ‘Putin is a thief’, and later, when police arrived to detain them, ‘The police with the people!’  U.S. Ambassador Michael McFaul called the detentions ‘troubling’.  5,000 (or 2,000, depending on your source) also gathered in St Petersburg.  A further rally is planned for March 10, as negotiations on its whereabouts continue.  You can view images from the protests here.

France says it will work with Putin, despite an election that was ‘far from exemplary’.  The European Union says it broadly agrees with international monitors on election ‘shortcomings’.  The Guardian has compiled a selection of other international reactions to the news.  United Russia candidates won four of the six mayoral elections on Sunday, as more reports of voting fraud emerged, with A Just Russia rejecting the results of the mayoral vote in Astrakhan and regional news reporting that exit pollsters in Arkhangelsk were manhandled by anonymous men.  Putin’s results in Chechnya, ‘a place that he virtually declared war on after becoming president in 1999,’ were ‘statistically improbable’, with a turnout of 107%.  The results give a literal meaning to the phrase ‘incredible victory’, says Bloomberg.  A Moscow election monitor says the vote at his Moscow polling station was clean.  RFE/RL has a round-up of election-fraud tactics.

Spokesman Dmitry Peskov says that the tears shed by Putin during his acceptance speech were caused by, not prideful patriotism, but bitterly cold wind.  The Guardian ran a very thorough liveblog yesterday, beginning with election victory and ending with the detention and release of 500 protesters at the Moscow rally.  Here’s an interactive map of Putin’s political policies over the last 12 years; and another one for regionally-organised election results.

Russia believes that a new U.N. Security Council resolution on Syria is only a slight modification of the previous, and not ‘substantially balanced’.  Katya Zatuliveter, cleared of accusations that she was spying for Russia, is interviewed by the Telegraph on why she’s campaigning against Putin.  Medvedev’s call to re-open the Khodorkovsky case is ‘an attempt to beat out the clock. Medvedev wants to leave his mark on history, but to give an order for a review does not mean these decisions will be overturned,” said Mark Feigin, a political analyst and member of the Solidarity political movement.  Luke Harding at The Guardian interviews Cyril Tuschi, the director of the documentary ‘Khodorkovsky’.  Investigators have reportedly identified the seller of the gun used to kill Anna Politkovskaya.

The Ukrainian activist group, Femen, who caused a stir at Vladimir Putin’s polling station on Sunday by storming in, bare chests painted with anti-Putin slogans, and trying to steal the ballot box, have been sentenced variously to between 5 and 12 days in prison on charges of ‘rank exhibitionism’.