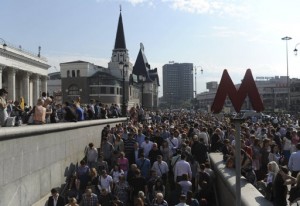 Former chess champion and political opposition figure Garry Kasparov spoke in Geneva about his exile yesterday, saying that he will not be returning to Russia due to concerns about political pressure connected to ongoing investigations into last year’s Bolotnaya Square protest. ‘Right now, I have serious doubts that I would be able to travel out again if I returned to Moscow.’  Kremlin opponents say that the trial of the twelve Bolotnaya protesters is a ‘Stalin-style trial’.  Liberal economist Sergei Guriev says he will not consider returning to Russia unless justice prevails. ‘Maybe Aleksei Navalny will be cleared and Khodorkovsky will be freed. Then I will think about what to do.’  Guriev writes in the New York Times today about the events that led up to his fleeing to France.  Bloomberg writes on liberal emigration, noting the further exile cases of journalists Masha Gessen and Oleg Kashin.  An HIV activist who handed out condoms near a World War II monument to promote awareness has been fined $300 for ‘violating procedure’ for public protest.  Moscow Mayor Sergei Sobyanin has handed in his resignation, in a bid to force an early election and get an advantage over his rivals, prompting Left Front leader Sergei Udaltsov, who is currently under house arrest, to announce his intention to run.

The new law prohibiting officials from holding foreign assets will not prevent them from holding such assets, but rather make them better at concealing them, says Finn Andreen.  Russia wants Georgia to revoke a law on occupied territories that, currently, penalises citizens for visiting the disputed territories of Abkhazia and South Ossetia.  Rosneft and Gazprom have been granted rights to explore the Arctic shelf.  VTB is proposing that cash-strapped Russian banks pay their dividends in the form of shares.  It was ‘Ecologist Day’ yesterday; the head of Russia’s Greenpeace branch called it ‘a very cynical title because practically no attention is paid to ecology in Russia’.  Is Erdogan’s Turkey the next Putin’s Russia?  ‘Everything that is happening around Syria has less to do with promises to Assad personally and more to do with power plays between Russia and the West.’  120 drugs officials from around the world gathered in Moscow yesterday to discuss cooperation on curbing drug traffic.

The judge acting as coroner for Alexander Litvinentko is calling for a public inquiry into his death.  A hacking attack on Russia Today ‘soured’ its celebration of reaching 1 billion viewers on YouTube.  Two members of Pussy Riot made an unannounced appearance at a radical feminist bookstore in New York yesterday.

PHOTO: Passengers seek alternative routes at the Leningrad and Yaroslav railway stations after a line on the city’s metro closed due to a fire June 5, 2013. Seven people were hospitalised and over 4,000 people were evacuated following the closure, local media reported. REUTERS/Alexander Sayganov