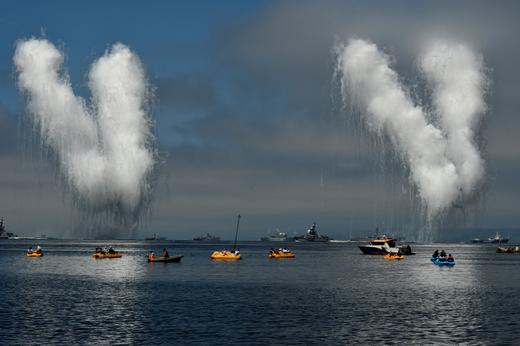 President Vladimir Putin signed into law an unpopular measure to increase VAT from 18 to 20%, beginning in January of next year. It is thought that 90% of Russians oppose the proposed pension reforms, leading to waning support for Prime Minister Dmitry Medvedev and the United Russia party; regional deputies are resigning as a result. Someone blew up the entrance to the National Pension Fund office in Kaluga. Deputy Foreign Minister Sergei Ryabkov spoke out against Washington’s latest sanction efforts, saying that such measures are ineffective in putting pressure on Russia. Despite sanctions-related troubles, shares in Oleg Deripaska’s Rusal climbed 6% after it reported a profit for the second quarter. Best Western is the final Western hotel chain to pull out of Crimea over sanctions complications. As part of the Kremlin’s plan to turn Crimea into a cultural capital, it will move six masterpieces from the country’s top galleries to a new arts centre there.

Opposition leader Alexei Navalny announced that Russia has compensated him $63,000 for the “fabricated” fraud case that prevented him from running in the 2018 presidential elections. Around 30 LGBT rights activists were detained at an unsanctioned rally of around 60 people in St Petersburg. The demonstrator’s co-organiser said the police targeted those who were most colourfully dressed. A Siberian man is under investigation for hate speech after “racially and politically charged images”, including a meme slamming Orthodox Patriarch Kirill. The Moscow Times mourns the loss of the independence of Forbes Russia, “an incredibly important institution that played a key role in the uneasy relationship between the United States and Russia”. The Foreign Ministry says gun rights activist and suspected spy Maria Butina is being mistreated in US detention.

Russia has appointed US movie star Steven Seagal as a special envoy for humanitarian ties with the US. Global experts on the work of Soviet author Alexander Solzhenitsyn are gathering in Vermont. A helicopter crash in Siberia killed all 18 passengers.