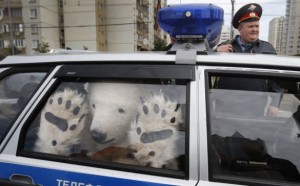 Gazprom has hit back at the European Commission,which opened antitrust proceedings against it this week, pointing out that ‘Gazprom is an institution set up outside the jurisdiction of the EC’, and insisting that it ‘scrupulously abides by all the provisions of international law’, although it did not deny breaking EU antitrust laws.  The probe has led to the company’s biggest share drop in five weeks.  President Vladimir Putin has given an interview to the state run television channel Russia Today, his first since his May inauguration, to be broadcast later today.  Pre-released quotes show Putin denying responsibility for the Pussy Riot sentencing.  This coincides with his latest pro-wildlife stunt of flying with endangered cranes.  He also commented that Russia’s World Trade Organisation membership will be used ‘to participate more broadly in setting the global trade rules’.

Rosneft will start construction today on a $5.36 billion petrochemical plant in the Far East.  The company is ‘taking a pause’ regarding its potential interest in buying BP’s stake in TNK-BP.  The offices of Borjomi Beverages have been searched in relation to its links with Boris Berezovsky, who may have invested money ‘acquired by criminal activity’ in the company.  Iran is to take full control of the Russian-built Bushehr nuclear power plant at the end of this year.  One Vladivostok local commented on the bustle leading up to tomorrow’s APEC summit: ‘Nothing will come of all these big plans.  They will forget about us as soon as the summit is over.’

A new government company may be created in order to borrow billions of dollars to relocate federal government offices, which could ‘thrill a wide range of banks’ due to a current ‘lack of good borrowers’.  An Orthodox Priest has been accused of attacking two pensioners in a road rage incident.  Are celebrities attempting to sell Duma seats to wealthy businessmen?

PHOTO: A Greenpeace activist, dressed as a polar bear, sitting inside a police car after being detained outside Gazprom’s headquarters on Wednesday. (Misha Japaridze / AP)