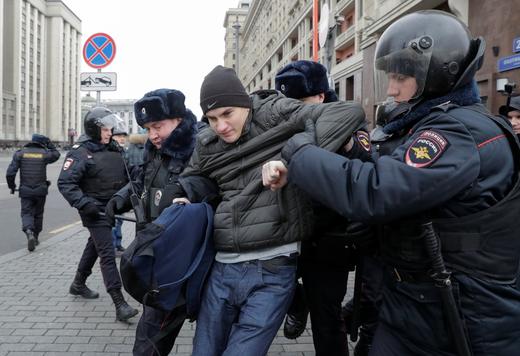 Hundreds of nationalist demonstrators were detained in Moscow on Saturday as they held an antigovernment rally to mark National Unity Day, (possibly linked to Kremlin critic Vyachelsav Maltese who has called for a revolution to end Putin’s rule, and whose Artillery Preparation movement has been banned as extremist) with hundreds more detained in St. Petersburg. Chelyabinsk authorities have warned residents not to wear gas masks to protest the region’s serious environmental pollution during President Vladimir Putin’s imminent visit. The Committee to Protect Journalists is calling on Russia to release Igor Rudnikov, editor in chief of Novyye Kolyosa newspaper, and investigate claims that he was severely beaten during his initial detention. On its centenary, this piece notes the ambivalence that Russians seem to have about judging the Russian Revolution as a good or bad historical moment.

Central Bank head Elvira Nabiullina says it will take up to 2 years to clean up Russia’s banking sector, part of a process that has seen the regulator revoking the license of 350 banks over the past 4 years. It seems that billionaire investor Yuri Milner may have been backed with hundreds of millions of dollars from the Kremlin for his Facebook and Twitter investments. Newly released documents reveal ties between US Commerce Secretary Wilbur Ross and a shipping firm with “significant business ties to a Russian oligarch subject to American sanctions and President Vladimir V. Putin’s son-in-law”. Russia has already initiated retaliatory actions against Canada after it revealed its “senseless and reprehensible” new sanctions on 30 Russian officials which, Russia says, will “isolate it from one of the key global powers”. Gazprom has signed an initial agreement with Iranian investment fund IDRO to cooperate on various energy projects.

A series of bomb threats across Moscow yesterday forced thousands of people to evacuate public places. The main role models of young Russians, after their parents, are Vladimir Putin, Elon Musk, and Jesus Christ, according to a VK poll.

PHOTO: Police officers detain a man, suspected of being an anti-government protester, in the centre of Moscow, Russia November 5, 2017 (REUTERS / TATYANA MAKEYEVA)