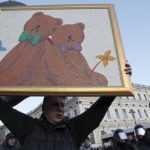 Opposition leaders are vowing to carry out more anti-government protests, as protesters detained on Monday face fines and the authorities are suspected of planning to use the protest ‘to paint the opposition as extremist’.  Many have criticised the police for treating protesters roughly, with activists more broadly concerned that violence and suppression will escalate in coming months.  Opposition leaders Sergei Udaltsov and Alexei Navalny appeared in court yesterday to face charges connected with their part in the protests.  A number of anti-Kremlin figures have criticised the pair for refusing to leave the ‘showdown’ in Pushkin Square.  Vladimir Putin has acknowledged some election ‘violations’, but dismissed the idea that they had anything to do with Monday’s protests, as former Soviet leader Mikhail Gorbachev said the possibility of holding a new election should be discussed.  The League of Voters has called the election results ‘an insult to civil society’.  The Guardian examines the foreign policy implications of Putin’s win and how Western leaders will be affected.  What does the future hold for Gennady Zyuganov, who ‘faces numerous challenges to stay relevant’?

‘Feminism never was popular in Russia, yet women had to be independent almost by definition.’  The New York Times has a special report on Mikhail Prokhorov’s sister, Irina, who drew the attention of the political world following her appearance standing-in on a debate for her brother.  RFE/RL talks to Prokhorova about what she calls an ‘incredible rift’ between ordinary Russians and their rulers.  Yesterday was the 75th birthday of the first woman in space, Valentina Tereshkova.  The Duma needs more female members, says a speaker.  Two detained members of the punk group Pussy Riot (both of whom have young children) are on hunger strike in custody to protest the conditions of their arrest.  The group’s supporters have appealed to the head of the Orthodox Church to drop the charges against them.

The Foreign Ministry says that the OSCE verdict on the elections ‘contains biased and disputable assessments’.  Election observer Yulia Latynina estimates that ‘not more than 35 percent of the Moscow vote went to Putin’.  The Independent puts the Moscow figure at 48.7%.  The Foreign Ministry responded to U.S. Ambassador Michael McFaul’s criticism of police methods by referring to U.S. police brutality in dealing with Occupy protesters.  Some of Sunday’s 800,000 spoiled ballots were covered with Putin slurs and calls for fair elections (and votes for Chuck Norris and Supercat, apparently).

Russia’s Syria stance is not likely to change under the new government setup, with the deputy foreign minister saying, ‘We are deeply convinced that we are right’.  U.S. President Barack Obama’s administration is considering passing classified data to Russia in order to allay concerns about its missile shield.  Investigators will not charge Russia’s top prison official with illegally wiretapping his secretary, with some suggesting that the accusation against him may have been linked to his firing of a group of officials in 2010.  Russia and Azerbaijan are moving closer to an agreement on their dispute over the Gabala missile defense radar.

A writer from Russia’s GQ magazine is claiming that he was physically assaulted by two other (pro-Putin) writers, one of whom admitted to the attack on Twitter.

PHOTO: A man holds a painting called “We grieve together with bear cubs” during an opposition meeting for fair elections in St.Petersburg, March 6, 2012. REUTERS/Alexander Demianchuk