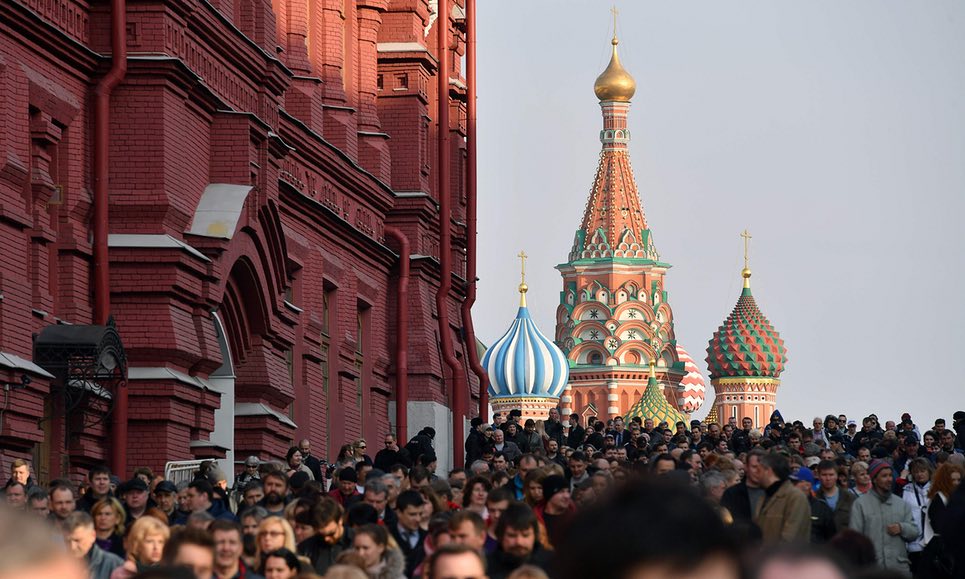 Thousands gathered in Moscow’s Manezh Square yesterday in a show of solidarity for the victims of the bombing in the St Petersburg subway this week, one of “dozens of demonstrations being organised by the authorities in around Russia over the next few days”. The Moscow Federation of Trade Unions requested the permit, which was fast-tracked by the authorities. State television counted 50,000 attendees, others counted less. Ekho Moskvy journalist Alexander Plushev discovered that a group of young people who left flowers to the victims near the Kremlin wall were not university students, as they said they were, but pro-Kremlin activists; he dubbed this move the “grief factory”. Eight people have been arrested in connection with the bombing. The FSB says it defused a third bomb in a residential building in St Petersburg yesterday morning. The European Parliament approved a resolution calling for the dropping of all charges against opposition leader Alexei Navalny, and for the release of him and all peaceful protesters and journalists detained after the March 26 demonstrations; it also condemned Russia’s “constant efforts to silence” him. Navalny’s campaign chief says he will continue to press the authorities to cancel their ban on his participation in next year’s presidential elections. The Investigative Committee has detained a man suspected of making an online call for mass unrest in downtown Moscow last week.

Kremlin spokesman Dmitry Peskov described the US’ Russian ambassador Nikki Haley’s sharing of pictures of young victims of the recent chemical attack in Syria’s Idlib as “an emotional gesture and nothing else”, and said that Russia’s role in Syria was in fact to prevent such tragedies. Peskov says it is still too early to blame the Syrian government for the attack, and insists that Russia’s support for Syrian President Bashar al-Assad is not unconditional. Russia’s broadcasts of the poison gas attack story did not portray any victims. The Israeli media is surprised by Moscow’s “unexpected, unprecedented, and curious move” in stating that it sees Jerusalem split in the future as both Israeli and Palestinian. The Russian Public Opinion Research Centre found Vladimir Putin to be the country’s currently most trusted politician.

The State Duma’s committee on information politics, technology and communication will hold a special meeting to investigate whether the Russian offices of Voice of America, Radio Liberty, and CNN are in compliance with Russian legislation, and whether or not their broadcasts amounted to interference in Russian elections. (The investigation was initially conceived of as a tit-for-tat move against the US investigation of RT.) Will the Trump/Russia investigation ever end? Reuters says it could take years to resolve.