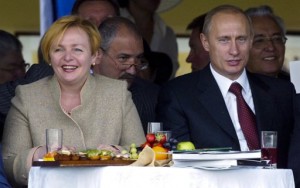 The trial against the 12 Bolotnaya Square protesters, charged with violence against police and participation in alleged mass riots, began yesterday in Moscow.  Ten of the twelve defendants have already spent over a year in jail, despite the lack of any convictions, and in response to prosecutors’ requests, will have their detentions extended by six months.  Opposition figures, including Solidarity’s Ilya Yashin, say that the case is part of a wider campaign of political repression. ‘The case is fabricated from beginning to end.’  President Vladimir Putin has announced that he is divorcing his wife Lyudmila Putina after 30 years of marriage.  The split was announced during a joint interview on national television, with both sides speaking amicably. ‘Lyudmila Alexandrovna and I will always remain very close, I’m sure of it, forever.’  The LA Times says Putina aired her grievances with her husband, over his absences and criticisms, in a biography over 10 years ago (in which she joked that he is ‘a vampire’).  The head of the Russian Orthodox church, Patriarch Kirill, issued a strong condemnation of divorce last year.

Following Garry Kasparov’s announcement that he will not return to Russia due to ‘serious doubts’ that he would remain free, and fears that he would be targeted in conjunction with a wave of investigations into opponents of Putin’s government, the Investigative Committee has issued the ultimate snub: ‘I’m afraid I have to gladden Mr Kasparov, or perhaps disappoint him. He has never been summoned by the Investigative Committee for any reason, and is of absolutely no interest to investigators.’  Gazprom chief Alexander Medvedev says E.U. regulations are hampering Gazprom’s access to the Nord Stream gas pipeline, and is demanding full access.  Rosneft will not pay a dividend to TNK-BP’s minority shareholders for last year, although they ‘had received generous dividends under TNK-BP’s previous owners’.  The chairman of the Central Bank may hold interest rates over fears regarding inflation.  The Economist discusses the success of retailer Magnit.

A southern Communist group want Elton John to wear a traditional Cossack uniform at his upcoming Russia concern, arguing that his usual flamboyant dress amounts to ‘homosexual propaganda’.  Snap elections for Moscow’s mayoral post will be held on September 8.

PHOTO: In this file photo taken on July 3, 2004, President Vladimir Putin and then his wife Lyudmila watch during horse races at the Moscow Central Hippodrome, Russia. (AP Photo/Alexander Zemlianichenko, File)