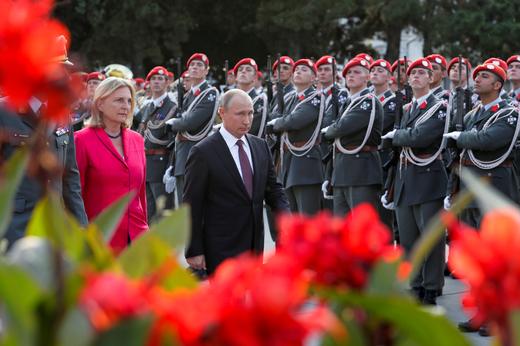 The new Italian Prime Minister used his first appearance in parliament to call for an end to anti-Russian sanctions and pledged his support to “opening up to Russia”. Leonid Bershidsky argues that the greatest obstacle to warmer relations between Russia and the European is President Vladimir Putin. Gazprom was able to extend its gas deal with OMV to 2040 during Putin’s visit this week. Like Austria, France has no intention of conducting any quick rethinking of European sanctions against Russia, saying that no changes will happen until advances in the peace process are made in Ukraine. The British Foreign Office has expressed concern about the four Ukrainians currently on hunger strike in Russian prisons to protest Moscow’s “politically motivated” detention of political prisoners from Ukraine. Ahead of his visit to China, Putin compared the country with Russia, arguing that both put their citizens’ well-being above all other concerns. He also suggested that he might have made a good lawyer had he not gone into politics.

A 51-year-old electrician has been handed a two-year suspended sentence for extremism for criticising Vladimir Putin in posts on social media. A majority of Russians (61%) hadn’t heard of the recent mass protests against Putin’s inauguration, according to a Levada Centre poll; only 9% said that they were “well aware” of them. The Central Bank is currently operating on the assumption that sanctions against Russia could continue through to 2022. The Bank is looking into ways to discourage insurance companies from becoming “too big to fail” and taking up an “excessive stake” on the market.  Russia is considering bringing the US to trial at the World Trade Organisation over its steel and aluminium duties. According to the latest ratings, Moscow State University has reached the top 1% of the world’s universities.

The president of the FIFA football association asserted that Russia is “100 percent ready” to host the World Cup this month, despite broad concerns about human rights, racism, and security; FIFA’s Secretary General told journalists that Russia is the most hospitable country she has ever visited. More than 1.5 million questions have been submitted in advance of President Vladimir Putin’s 16th live annual Q&A session, to be held tomorrow. The Moscow Times explains that the tried and tested format of the questions leaves “little room for any major surprises”.