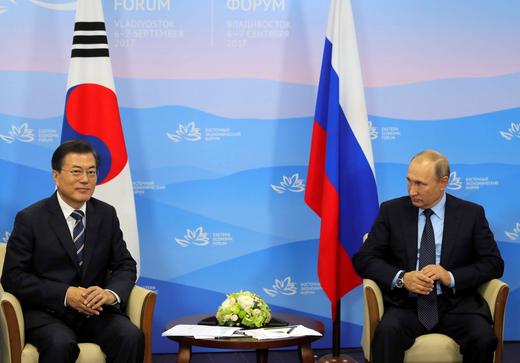 TODAY: June 12 protester given 2.5 years; Shaltai-Boltai hackers sentenced; HRW says police are targeting Navalny’s campaign; Putin says Russia will not cut off North Korea oil; NATO not concerned about upcoming Russia drill; Facebook thinks Russians may have been behind fake accounts that bought $100,000 worth of political advertising during US election campaign.

An anti-corruption protester from the June 12 rally earlier this year has been sentenced to 2.5 years in prison for kicking two National Guard officers; he is the first of the over 800 protesters detained that day to be given jail time, and says he only attended the protest out of “curiosity“. Two hackers that were part of the Shaltai-Boltai (Humpty Dumpty) group have each been given three years in prison for leaking the emails of top officials. Alexander Filinov and Konstantin Teplyakov were convicted of unauthorized access to data protected by law. Human Rights Watch has called out Russian police for “systematically” interfering with opposition leader Alexei Navalny’s presidential election campaign in an “undeniable […] pattern of harassment and intimidation”. The Kremlin has spoken out against recent statements about the existence of kompromat on Donald Trump.

President Vladimir Putin says Russia will not consider cutting off oil supplies to North Korea in connection with new sanctions; he said it would hurt ordinary North Koreans, and that no headway will be made without “political and diplomatic tools”. NATO chief Jens Stoltenberg say he does not see any reason for concern in Russia’s upcoming military maneuvers, but stressed the need for more transparency in the future. Facebook has revealed that hundreds of fake accounts which “appeared to be operated out of Russia” bought $100,000 worth of advertisements on the social network during last year’s US presidential election campaign which “appeared to focus on amplifying divisive social and political messages across the ideological spectrum — touching on topics from LGBT matters to race issues to immigration to gun rights”. Facebook says it has found no direct links with any presidential campaign, but that there are “unspecified connections” with the Kremlin’s so-called “troll factory” in St Petersburg.