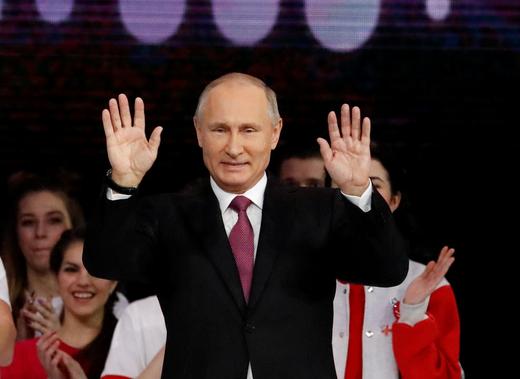 TODAY: Putin announces presidential bid for next year; IOC ban will boost his support? No Olympics boycott planned, and Putin will allow athletes to compete; military deaths leaked on purpose? Finance Ministry wants its bailout back; Rosselkhoznadzor goes after Pepsi.

President Vladimir Putin has finally announced, on live television from a factory in Nizhny Novgorod and, he claims, in answer to an unscripted question, that he will be running for president again next year. RFE/RL tries to guess at his strategy for the upcoming campaign, anticipating a focus on getting younger Russians on board. Another six-year term, which he will certainly win, will make Putin’s 24-year venture (including his four years as Prime Minister) the longest in Russian history since that of Joseph Stalin. This week’s International Olympic Committee ban on Russian participation will boost Putin’s support (not that he needs any help in that department, of course), says Reuters, by rallying voters around his message that the world is against Russia, which he hinted at during his bid announcement, saying “Russia will continue moving forwards, and nobody will ever be able to stop this forward movement.” Alexei Navalny, the only real opposition candidate, and who will not legally be allowed to run against him, commented on the news: “He wants to be in power for 21 years. In my view, that’s a bit much. I suggest we disagree.” Garry Kasparov quipped, “Did he also announce the results? Would save everyone a lot of time and effort.” The State Duma has banned journalists representing the US media outlets that it has registered as “foreign agents”.

Vladimir Putin said there will be no boycott of the 2018 Winter Olympics, and that Russian athletes will be allowed to complete under the Olympic flag, and said that Russia “is in part to blame for this ourselves, because we provided a reason for this”, but also stressed that he never instructed his officials to deliver victory at the Games in 2014. The Kremlin says the International Olympic Committee’s decision to ban it from the Olympics will need to be carefully analysed before it can make any official response. Foreign Ministry spokeswoman Maria Zakharova says the IOC’s decision is part of a larger anti-Russia campaign. Despite the ban, Russia’s doping problem is cultural and will take years to change, says whistleblower Olympian Vitaly Stepanov.

The Moscow Times wonders whether the recent leak of military service personnel deaths was done on purpose, given that the relatively small losses “show off [Putin’s] prowess as commander-in-chief”. The Finance Ministry wants its $1.4 billion bank bailout money back. Russia’s regions are advocating for their rights more than usual, pushing Moscow on its siphoning off of regional funds. Agricultural watchdog Rosselkhoznadzor has accused PepsiCo of “commercial espionage”.