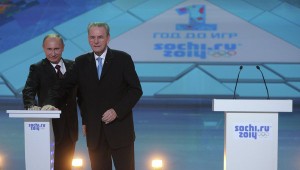 President Vladimir Putin invited to Russia ‘all those who love sports and fair uncompromising struggle’ for the 2014 Winter Olympics in Sochi, and then sacked Akhmed Bilalov, the Olympics official he ridiculed on state television earlier this week over the delayed completion of a ski jump. Yesterday marked the beginning of the one-year countdown to the games.  Former President Dmitry Medvedev is reluctant to reverse his 2011 decision to abandon daylight saving time, despite complaints that winter darkness now extends into the late morning.  But the measure is being reconsidered by the Kremlin in the run-up to the Olympics, as ‘broadcast rights worth billions’ are at stake.  Accusations of the exploitation of migrant workers at the Sochi site are continuing to appear. ‘An Uzbek worker at the Main Media Centre said he was not paid for his labour between December 2011 and February 2012. “I worked for almost three months, others for five months, for nothing.”’  The Audit Chamber has discovered nearly $4 billion in misappropriated funds from the 2012 defence budget.  The market value of the Kremlin’s assets is more than $3.3 trillion, and 50% higher than the country’s 2012 GDP.

Investigators raided the apartment of Vladimir Ashurkov, the director of the Foundation for Fighting Corruption, in connection with the criminal case against opposition leader Alexei Navalny. Ashurkov’s computers were seized in the raid, a bid to paralyse the activity of his foundation, says Navalny.  The hooliganism case against Alexander Lebedev over his televised punch-up with Sergei Polonsky has been upheld.  Lawyers for members of Pussy Riot are contesting the group’s convictions at the European Court of Human Rights.  The U.S. Justice Department is seeking information about the Kremlin-funded ‘Voice of Russia’ media organisation.  Japan says it sent four fighter jets to intercept Russian fighters that supposedly invaded its airspace near the Kuril Islands for 11 seconds on Northern Territories Day, which commemorates the anniversary of the 1855 treaty that gave Japan sovereignty over the islands and calls for their return.  Russia denies that its jets entered Japanese air space.

Ukraine’s Naftogaz says there are ‘no grounds’ for its paying Gazprom $7 billion for gas it did not use.  Michael Bohm seeks to dispel some ‘Russian myths’ about U.S. adoptions, as Russian celebrities approach Vladimir Putin to ask for adoptions already in process to be allowed to complete.  Russia’s Yandex has surpassed Microsoft’s Bing to become the fourth most popular search engine in the world.

Nikolai Tsiskaridze, a principal dancer at the Bolshoi, is accusing the ballet of conducting a ‘witch hunt’ against him.  A historic document proclaiming the death of the Soviet Union is missing from Belarusian archives. ‘It’s hard to believe the disappearance of a document at such a level, but this is a fact.’