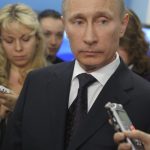 Today is a holiday in Russia to mark Women’s Day.  The Guardian writes on three of this year’s exemplary Russian women, Olga Romanova, Ksenia Sobchak and Irina Yasina.  The Independent reports that Sobchak’s online Russian talk show interviewed a girl who claimed she was offered $150 to cast five votes for Putin in Moscow.  But Russia was actually ‘complimented by international observers on the quality of its electoral rolls,’ notes Mary Dejevsky.  Either way, fraudulent results appeared not just in Chechnya: ‘Many of the other republics in the troubled North Caucasus region also polled improbably high pro-Putin results on improbably high turnouts.’  Alexei Navalny’s response to the arrest and detention of members of punk band Pussy Riot was to mock both the band and the charges. ‘Is their offense so publicly dangerous to keep them behind bars? Obviously not. Are there circumstances ruling out keeping them in detention? Obviously yes.’ He called their 60-day detention ‘senseless and horrible cruelty’, given that both detainees have young children.  Dmitry Peskov called the group’s performance ‘disgusting’.

Vladimir Putin says that the opposition movement must ‘come up with proposals on the future development of the country’ if they want to become a real political force.  ‘Those who lose never like their defeat,’ he said, as Peskov defended the actions of riot police against protesters on Monday, commending them for a ‘high level of professionalism’.  Putin’s comments that the Mikhail Khodorkovsky verdict is founded in law put a damper on Dmitry Medvedev’s plans to have the case reviewed.  Could Mikhail Prokhorov be given a place in Putin’s new government?  Kremlin oppositionists the League of Voters are calling Putin’s election victory, which was officially announced yesterday by the CEC, an insult to civil society and are refusing to recognise it.  Moscow officials have granted permission for a protest of 50,000 people this weekend in Arbat Square.

British MPs, including three former foreign secretaries, are calling on the government to impose sanctions on Russian officials involved in the death of lawyer Sergei Magnitsky. Russia’s Vitaly Churkin accused Libya of running a training center for Syrian rebels during yesterday’s U.N. Security Council meeting.  Putin has dismissed rumours that Russia will grant political asylum to the Syrian president.  U.S. lawmakers are resisting Barack Obama’s call to strengthen trade ties with Russia and repeal Jackon-Vanik, citing ‘rampant corruption’ and ‘theft of U.S. intellectual property’.  Japan says it will not sign a peace treaty with Russia unless the disputed Kuril Islands are returned.