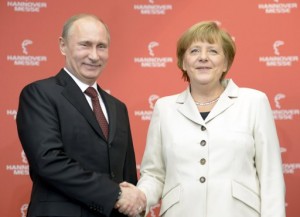 President Vladimir Putin was greeted by ‘several hundred protesters’ on his arrival in Germany, who were demonstrating against recent Kremlin crackdowns on foreign-funded NGOs.  In response to urging from civil rights groups, as well as her government, German Chancellor Angela Merkel called on Putin to allow Russia to have an ‘active civil society’ and to give NGOs ‘a good chance’.  In an interview with a German broadcaster, Putin defended the ‘foreign agent’ law he signed last year and said that Russia had the right to know which of its NGOs are foreign-funded ‘and for what purposes’.  Putin and Merkel were also expected to discuss the Cyprus crisis; Putin has spoken out in defense of Russians who lost money in Cypriot banks, saying that they had not broken any laws, and that it is Europe’s responsibility to close offshore zones.  Up to 1,500 people (some reports indicate much lower numbers) took part in a sanctioned rally in Moscow’s New Pushkin Square on Saturday to call for the release of those detained at anti-Kremlin protests last May, and to call for the dismissal of Investigative Committee chief Alexander Bastrykin.  ‘It’s not mass repression yet, but we are holding this demonstration in order to stop the possibility of the mass repression that we already overcame — the most terrible repression in the 1930s.’

A report commissioned by former Finance Minister Alexei Kudrin alleges that the authorities are hampering the development of civil society, and that Russia’s elite will demand that Putin step down at the end of his third presidential term.  A state-appointed lawyer who is representing Sergei Magnitsky in his posthumous tax evasion trial has asked to be removed from the case, saying that his participation is illegal, as he has ‘not found a single declaration from relatives asking that the case be reopened.’  Russian officials are still working to win the return of Kirill Kuzmin, the brother of Max Shatto, to Russia, despite rulings that Max’s adopted parents were not responsible for his death. A newly released recording reveals Shatto’s adoptive mother ‘frantic and crying’ as she tried to revive him, although Russian officials still blame Shatto’s parents for the boy’s death.

The Moscow Times reports on protest art, including photography, poetry, and rally slogans.