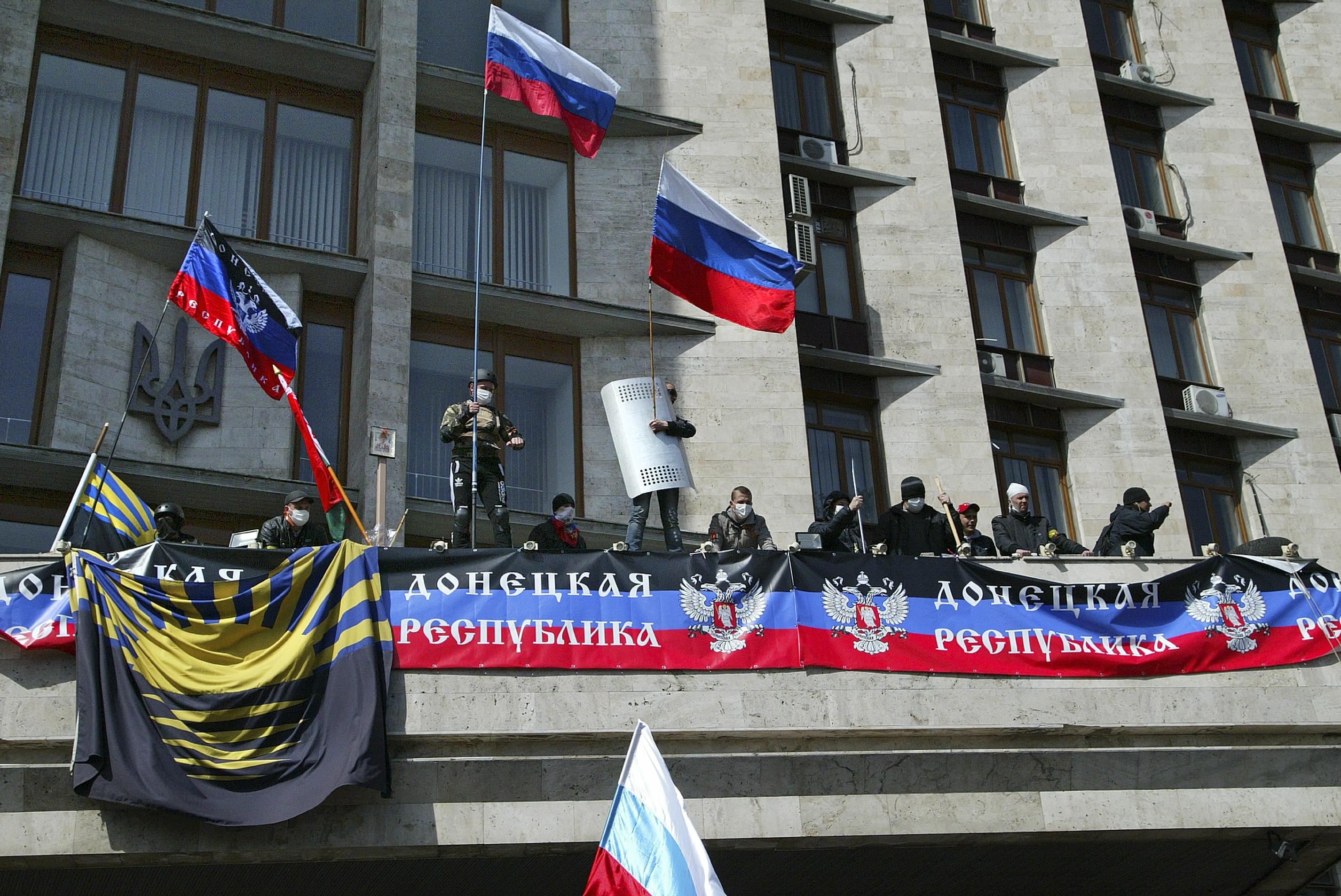 A referendum on joining Russia will be held in Donetsk, Ukraine on May 11, where anti-government protesters are calling in the meantime for the protection of Russian ‘peacekeepers’ and, according to some reports, have declared the city a people’s republic.  The State Duma says it is considering sending a delegation.  The White House says it has ‘strong evidence’ that pro-Russian demonstrators in Ukraine are being paid; President Vladimir Putin in turn made his own accusations about the West using NGOs to fuel dissent in Russia, and alleged that security forces foiled hundreds of foreign spies in 2013.  U.S. Secretary of State John Kerry threatened Foreign Minister Sergei Lavrov with ‘further costs’ in the event of further actions in Ukraine.  This is a prime moment for Putin with Ukraine, says the WSJ: ‘Never again will the administration in Washington be so inept, its threats so hollow.’  Any further sanctions imposed on Russia by the E.U. could actually damage the German engineering sector, says trade body VDMA.  Six activists were detained near the Kremlin yesterday for holding ‘invisible posters’.

The row over the fate of VKontakte (Russia’s answer to Facebook) has escalated after founder Pavel Durov retracted his resignation, arguing that the sale of 48% of the company’s shares to United Capital Partners was illegal and that the company was unfit to control the site: ‘We will insist that the law be fulfilled that was designed to protect our social network from intrusion and destruction.’  The FBI’s Boston office issued warnings to tech companies in Massachusetts that Russia may be looking to steal their intelligence.  Prime Minister Dmitry Medvedev says Russia will not import GMO products, as the country is more than able to produce organic food – unlike, he said, the United States.  A book on Vladimir Putin’s ‘unexplained, and somewhat unexpected’ rise to power in the 1990s has been pulled by its publishers over fears of a libel suit: the author spoke to the Washington Post about why the book is so controversial.  Voters in Novosibirsk, Russia’s third-largest city, have elected Communist Party candidate, Anatoly Lokot, as their mayor.

Ukraine has missed the deadline Gazprom set for it to pay off its $2.2 billion gas debts.  Gazprom says that there is no viable U.S. replacement for Russian gas in Ukraine, due to the lack of material means required to transport LNG.  Ukraine is estimating that it has lost $10.8 billion in natural resources assets with the loss of Crimea.  The Organising Committee of the Sochi Olympics posted profits of around $140 million and applauded themselves for meeting international standards.  How will NASA’s boycott of Russia affect the space station?