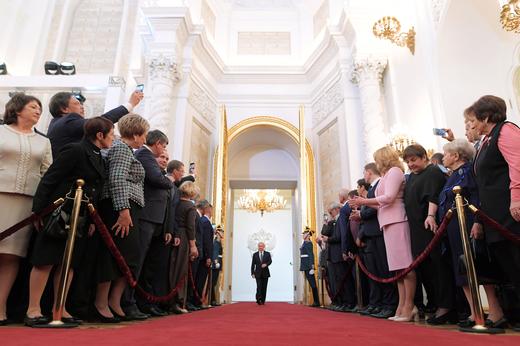 President Vladimir Putin attended his fourth inauguration (“more a coronation”, commented this piece) yesterday, speaking of his “colossal responsibility” to Russia and dedicating his life to “its peaceful and prosperous present and future”. A poll released to coincide with the event claimed that 82% of Russians approve of Putin’s achievements thus far; this straw poll found more of a mixture of opinions. RFE/RL has full text of his inaugural speech, together with some handy notations on his election, polls, goals, and recent protests. Putin’s inaugural demands of his government include nine “national development goals” that will somehow put Russia in the world’s top five largest economies by 2024, and reduce its reliance on oil exports. The Washington Post notes that the only three people Putin shook hands with in the audience included former German chancellor Gerhard Schröder, a strong reminder of Russia’s allies abroad. “This was a signal that those who take a positive position in relation to the Kremlin will be supported by it.” Analysts make some predictions for Putin’s fourth term.

Putin again put Dmitry Medvedev forward as his Prime Minister, who immediately proposed appointing Finance Minister Anton Siluanov as first deputy prime minister. Former Sports Minister Vitaly Mutko was also proposed for a deputy PM role, this time overseeing construction. Putin will be traveling in a Russian-made limousine from now on, instead of in imported vehicles. Among those beaten or detained during anti-government protests over the weekend, almost two dozen were journalists; roughly half of those were targeted by police “precisely because of their status”, claimed the Journalists and Media Workers Union.

The Rosneft-CEFC China deal has fallen apart, but Russia nonetheless has cemented its position in China’s energy industry, says Bloomberg. NATO says Russia is taking advantage of its military role in Syria by bolstering its naval presence in the eastern Mediterranean.

PHOTO: Guests attend a ceremony inaugurating Vladimir Putin as President of Russia at the Kremlin in Moscow, Russia May 7, 2018. (SPUTNIK)