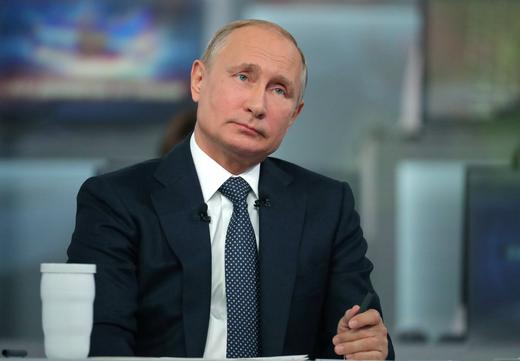 President Vladimir Putin held his sixteenth annual live Q&A session yesterday, which ended up running for over four hours. The Moscow Times summarises the salient points, including Putin’s takes on Sergei Skripal (Putin demanded consular access), sanctions (levied because Russia is a global competitor), doping, oligarchs abroad (they’d be better off in Russia), the Telegram ban (it’s difficult to find “civilised solutions” for Internet safety, he said, but blanket bans are not the way forward), the World Cup, Vitaly Mutko (impossible to sack), Hypothetical World War IV (a war of sticks and stones), Syria (no plans to withdraw), and the economy (everything is fine). He also said that he had no knowledge of the #MeToo scandal involving Duma deputy Leonid Slutsky earlier this year. RFE/RL, who live blogged the entire event, gathered some of the more incendiary questions that were texted in during the session, which appeared on the screen but were not answered, including messages about living standards, Alexei Navalny, the lack of public toilets in Moscow, and “is the oligarchy forever?” The event, says Bloomberg, “was marked by the contrast between the president’s upbeat report on the economy and the sometimes desperate tone of the questioners about how to make ends meet on shrunken incomes”. This piece chased up some of the callers from last year’s show, to see how well their complaints had been dealt with. This year’s Q&A was heavily scripted, unlike some of the juicier Direct Line shows of past years, claims this piece.

Putin gave indication that Russia’s oil industry will never be nationalised, saying it would be “a complicated and very dangerous process”. Sweden has given its permission for the construction of the Nord Stream 2 pipeline in its Baltic Sea zone, and construction will begin in the coming months. This piece argues that Russia’s hosting of the World Cup this month will allow it to conceal Syrian war crimes behind the media spectacle of the games. Reuters says Russia’s hosting “sends a message of defiance to the world [that] Russia is succeeding despite Western efforts to hold it back”. Vladimir Putin told Chinese state television that the US will need to offer “absolute” security guarantees to North Korea if it wants Pyongyang to get rid of its nuclear weapons.

Central Bank Governor Elvira Nabiullina is proposing a mechanism that would prevent the owners and senior executives of failing banks from leaving the country. As it anticipates a cash injection from Chinese companies, Russia’s Direct Investment Fund says it has received $1.8 billion from Saudi Arabia.