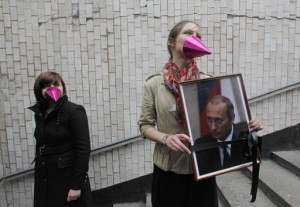 Yesterday marked the sixth anniversary of the assassination of journalist Anna Politkovskaya, with 200 people gathering for an authorised rally in Moscow to mark the occasion.  The U.S. State Department made a tribute to Politkovskaya, calling her ‘a champion of human dignity’, and calling on the Russian authorities to find those responsible for her murder.  Alexei Navalny’s plans to launch a debit card to fund his anti-corruption work are on hold after the main bank backing him withdrew its support.  Prosecutor General Yuri Chaika has ordered that recent claims that the opposition are using money from abroad to finance preparations for a seizure of power should be checked.  Reports say that a ‘strong opposition contender’ for the mayoral race in Voskresensk was beaten unconscious in broad daylight last week.  Yesterday was also the birthday of President Vladimir Putin, who turned 60.

The event marked by many Russians ‘with adulation fit for a king’ – the town of Vladimir, for example, changed all of its street signs to reflect Putin’s full name, Vladimir Vladimirovich, and specially-released polls revealed that one in every five Russian women would like to marry the President, and that 64% of Russians are positive about the Putin era.  The Kremlin tried to downplay its role in the celebrations, but ‘[s]ome of the praise was so extreme as to appear almost like a subtle form of satire.’  There were many demonstrations to the contrary, also, with protesters focusing on Putin’s lengthy stint as Russian leader and talking about retirement, and ‘a few articles have also appeared asking questions about the lack of an obvious successor or a transparent succession process.’  A documentary aired to mark the event featured an interview with the President, who spoke about needing to cast aside the opposition like ‘husks’.

Tajikistan has given Russia a 30-year extension on its Soviet-era military base, in exchange for economic and political backing.

PHOTO: Opposition activists pose with a portrait of Russia’s President Vladimir Putin, with a black ribbon commonly used for the deceased tied around it, on Putin’s birthday in Moscow October 7, 2012. REUTERS/Maxim Shemetov