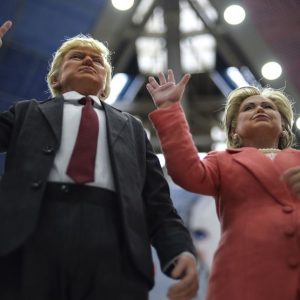 ‘[I]t has been the dirtiest election campaign in the history of the United States. Everything turned out to stink so hideously that what the United States calls ‘democracy’ now prompts nothing but disgust’: the words of news anchor and Kremlin propagandist Dmitry Kiselyov ahead of Tuesday’s U.S. presidential elections on major Russian news show Vesti Nedeli.  RFE/RL suggests that Kiselyov’s invective is part of an attempt to discredit the entire election and thus legitimise Russian electoral practices.  Some don’t feel that this is entirely problematic: Bloomberg’s Leonid Bershidsky writes that, ‘Putin is providing a useful service to the U.S. by holding his malicious mirror to its political establishment. It’s a troll’s mirror, but it does reflect a nasty reality’.  Foreign Ministry Spokeswoman Maria Zakharova has accused Washington of attempting to block Russian representatives from coming near polling stations and says the U.S. has become paranoid about Russia influencing the elections.  In retaliation, the Foreign Ministry has sent a diplomatic note to the U.S. authorities forbidding their diplomats from monitoring future Russian elections.  ‘We have neither the right nor the intention of interfering in the U.S. election process,’ says Putin’s spokesman Dmitry Peskov, because, ‘there are many problems even without our interference’.  Time examines the possibly that Western hackers may be behind the Surkov Leaks, the hacking of a number of emails written by Kremlin aide Vladislav Surkov, who is now overseeing Russian involvement in eastern Ukraine.  Maria Alekhina of Pussy Riot has penned an article for Newsweek explaining what she believes Russia can learn from the U.S. election.

Russian ties with China are deepening, says Forbes, a view supported by a spate of recent agreements.  The meeting of the Russia-China Business Advisory Committee saw plans emerge for the establishment of a $100 million joint Russia-China Venture Fund.  Gazprom and China National Petroleum Corporation have signed agreements on cooperation and Rosatom will construct new nuclear power plants in China as a result of a meeting between Prime Minister Medvedev and his Chinese counterpart, Li Keying.  Rosneft will apparently sell 20% of its subsidiary Verkhnechonskneftegaz to Beijing Gas for around $1.1 billion, if regulators approve it.  The oil giant’s CEO, Igor Sechin, will be re-elected as the chairman of its board.  A day of negotiations seems to have brought Russia and Tajikistan into agreement on maintaining air travel between the two countries.

A group of opposition groups have asked authorities in Moscow for permission to stage a protest against the bombardment campaign in the all-but-destroyed Syrian city of Aleppo.  Although the country remains in a state of economic crisis, officials are like to see their salaries increase by 38% as of January 2019.  New statistics would seem to indicate that Russians are drinking less alcohol.