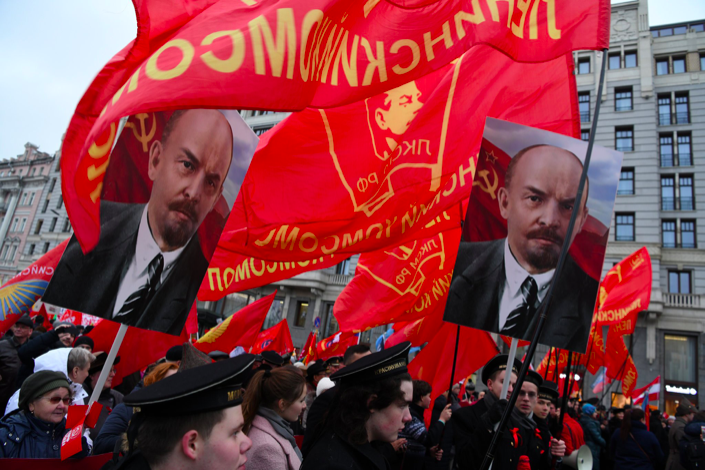 Thousands of communist supporters from all over Russia gathered in downtown Moscow yesterday for a march organised by the Communist Party, carrying red flags and chanting slogans (including “Russian without Putin” and “We don’t need the thief Putin, we need a living Lenin”) to mark the centenary of the Russian Revolution. The Kremlin plays down the significance of the Revolution, says the New York Times, because “the history of the revolution — and of the czarist past, and for that matter of the entire world — was written to fit the myth of Soviet Russia as the vanguard of civilization”. The date is no longer a holiday, and there is no longer a parade; the government has instead this year “shunted the revolution’s anniversary off into the realm of art exhibitions and research papers”, and Putin avoid attending any of the related events. This piece explains why “the next big socialist experiment won’t start in Russia”. The Tate Modern in London is to show three paintings by Soviet propagandist Aleksandr Deineka. A series of photographs show how Russia has and has not changed in the century since the Revolution. Long-time Communist Party leader Gennady Zyuganov says he will run for president next year (it will be his fourth run).  Six members of opposition group the Other Russia have been given jail terms (from 8 to 33 days) following their participation in an unsanctioned rally in St Petersburg at the weekend; 17 others from the same group were fined (and, it seems, some Pokémon players were caught up in the foray).

The Chief of Russia’s General Staff says Russia’s military presence has increased considerably in “strategically important regions of the world”, as has its level of combat readiness, but Bloomberg counters the notion that Putin has strengthened Russia’s global position in recent years with an account of “the long-term costs of Putin’s foreign engagements” over the same time period. Private pension fund Buduschchee, one of Russia’s largest, posted a loss of $44.4 million for the first 9 months of this year, in part thanks to the failure of Otrkritie, in which it owns a 4% stake. If Russia is going to be hit by an economic crisis, says the Moscow Times, it will most likely start int he regions that are already seeking financial help. Kremlin aide Vladislav Surkov aka “the Red Cardinal” is predicting that the West will end up with a Tsar.

Russia has made an agreement with an Israeli library to digitise and publish online the Gunzburg collection, a substantial collection of ancient Hebrew manuscripts and books seized by the Soviet authorities last century. Italy’s Foreign Minister says anti-Russian sanctions are continuing to stand in the way of productive economic partnership with Russia. TASS will be given $3.5 million in government funding over 3 years to develop a social and political channel for children. The Verge quantifies the weirdness of Russia’s Facebook ads as: “much weirder than anyone expected”.

PHOTO: Supporters of the Russian Communist Party, including some dressed in Soviet naval uniforms, gathered in central Moscow on Tuesday to celebrate the 100th anniversary of the Russian Revolution. (James Hill for The New York Times)