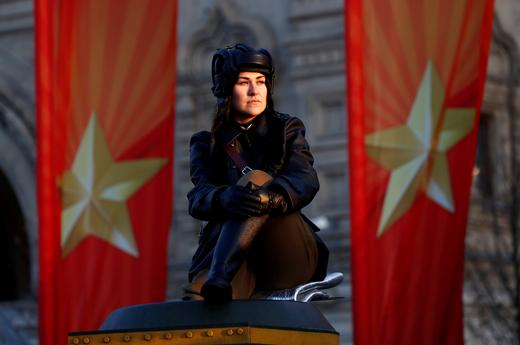 Human rights lawyer Lyumila Aleksandrova had her car set on fire this week in Krasnodar, during a case in which she is defending the only witness who saw police beating up rights activist Mikhail Benyash. The trial of theater director Kirill Serebrennikov began in Moscow yesterday. He faces up to 10 years in prison on embezzlement charges which he denies (“the charges are not only absurd but actually unclear,” he said), and has already been under house arrest for over a year. The trial is viewed by Russia’s arts community as related to much larger issues of freedom of expression, given the nature of Serebrennikov’s work. The New York Times noted in particular his portrayal of the homosexuality of Rudolph Nureyev, especially controversial in the country that wrote a law against “gay propaganda”. The Moscow Times speaks to Lyubov Sobol, one of Alexei Navalny’s longest-serving aides and the leader of his YouTube channel Navalny LIVE.

The 77th anniversary of a World War II era parade was marked in Moscow’s Red Square yesterday by marching soldiers. China says that restrictive sanctions from the US are helping to cement its close Russia ties. Russia is investigating options for developing a European market for hydrogen, one of its primary exports. Gazprom is trying to produce emissions-free hydrogen in order to appease European efforts to reduce greenhouse gas emissions. RusHydro opened a wind farm in the Arctic to help reduce reliance on diesel. SUEK will be ramping up coal output by 18% over the next four years with $3 billion planned in development, a response to the Kremlin’s call to take a larger share of the global coal market. Billionaire Dmitry Rybolovlev has been declared a formal suspect in a corruption probe by a Monaco judge. Bloomberg calls this news “a signal to other wealthy Russians who might dream of getting rid of all their assets in the home country, as Rybolovlev did”.

State bank VTB reported net profit of more than double last year’s numbers, thanks to growth in lending and better cost efficiency. Moscow State University is offering an elective course on information wars, taught by a former FSB agent. Luke Harding presents a selection of books showing the influence of Russian spies and money around the globe.

PHOTO: A participant sits during preparations for a military parade to mark the anniversary of a historical parade in 1941, when Soviet soldiers marched towards the front lines during World War Two, in Red Square in Moscow, Russia November 7, 2018. (REUTERS/Maxim Shemetov)