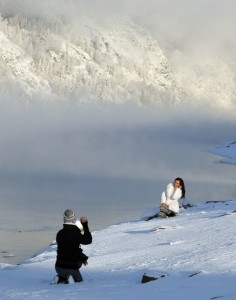 TODAY: Markets re-open on a high; EEU creating pressure among potential members; Polonsky could be detained until end of month; tax on screenings of foreign films; cosmonauts and the space industry; new radar stations; wolf hunt.

Russian markets re-opened yesterday after the New Year’s holiday and both RTS and the MICEX started the year well thanks to ‘an improvement in global sentiment’, rising by 3.22% and 2.72% respectively.  Vladimir Putin’s goal of creating a Eurasian Economic Union to rival the EU ‘is creating intense pressure within countries like Armenia, Moldova, and Ukraine to pick one path or the other’.  Tycoon Sergei Polonsky (who made headlines in 2011 for his televised fisticuffs with Alexander Lebedev), currently being held in Cambodia over accusations that they detained and attacked local sailors, may not be released on bail until the end of this month.  United Russia wants to begin taxing screening of foreign movies and introduce exhibition quotas for local films in a bid to boost the domestic industry and ensure that at least one in every five movies shown at Russian theatres is a domestic product.  The Huffington Post says that Russia is treating its orphans like ‘human iron ore’ by imposing its adoption ban.

Russian cosmonauts are five times poorer than their Western counterparts and Russian civil aviation pilots, even after new salaries being recently approved by the government.  An interview with Vladimir Popovkin, the head of space agency Roscosmos, touches on plans for international cooperation, new rockets, and the health of the industry.  Russia is replacing the Gabala radar station in Azerbaijan with a new system in Krasnodar, and overall will receive 20 new radar stations this year.  Officials in Yakutia, Siberia, are offering six-figure rewards for hunters, after ordering that 3,000 wolves be killed in response to estimates that 3,500 of the animals are terrorizing local livestock.

As part of a joint venture tie-up, Italy’s Generali will take a 38% stake in Russian insurer Ingosstrakh.  Turkey is increasingly reliant on its own coal supplies as it seeks to ease its energy dependence on Russia and Iran.

PHOTO: A woman poses for a photographer on the bank of the Yenisei River, with the air temperature at about minus 25 degrees Celsius (minus 13 degrees Fahrenheit), outside Russia’s Siberian city of Krasnoyarsk, January 8, 2013. REUTERS/Ilya Naymushin