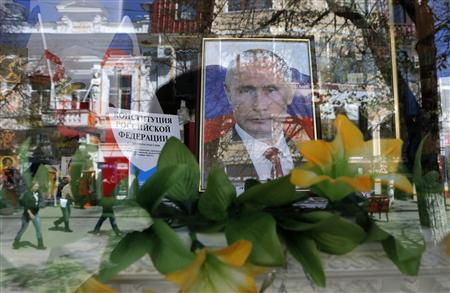 U.S. Secretary of State John Kerry described the Russia-Ukraine situation as ‘more than deeply disturbing’, alleging that Russia is making ‘ham-handed’ and ‘transparent’ efforts to stir dissent by planting agents in Ukraine.  Tensions in Ukraine have spread beyond Crimea to Donetsk, Kharkiv, and Luhansk (also known as Lugansk), and Kiev is sending tanks to Luhansk to defend against a possible armed attack after protesters allegedly stormed a regional security department and seized weapons there. Kiev still blames Russia for fomenting dissent, and Nato is warning Russia that further intervention in Ukraine would be a ‘historic mistake’, reiterating its call for the pulling back of troops from the border.  Kazakhstan is seeking alternative routes for its oil exports in the event of harsher sanctions against its Russian ally; the South Stream pipeline may be another victim of Europe’s wrath.  Estonia says more economic sanctions would hurt European countries, but might be a necessary way of getting the message across: ‘We should not accept, by any means, invading other countries.’  A meeting of Russian, U.S., E.U. and Ukrainian ministers will be held next week to address the crisis.  Swedish security services say they are fearful of a war with Russia after intelligence communications indicated more attempts to recruit spies: ‘You don’t carry out these kinds of things unless you can actually conceive carrying out an attack in the future.’

The substantial costs of annexing Crimea indicate that the move ‘was an impromptu response to Ukrainian President Viktor Yanukovych’s unexpected ouster rather than the implementation of a carefully prepared plan’, says the Moscow Times.  President Vladimir Putin is urging ‘accelerated’ action to rescue the country’s business climate; Russian companies are being instructed to delist their shares from overseas stock exchanges to safeguard them against international sanctions.  Deputy economy minister Andrey Klepach says Russia needs to increase public spending to overcome stagnation and halt capital outflows.  The E.U. is opening a case against Russia before the World Trade Organization regarding a pork import ban.

Cinemas in Novosibirsk were fined over $100,000 for screening The Wolf of Wall Street, supposedly because the film promotes the use of illegal drugs.  The Constitutional Court ruled to uphold the controversial law forcing foreign-funded NGOs to register as ‘foreign agents’.  A new interview with Pussy Riot members Nadezhda Tolokonnikova and Maria Alyokhina addresses topics of Vladimir Putin and how to deal with fear. ‘Our strength is in our weakness.’  Hillary Clinton posed for Twitter photographs with the pair and praised them for their strength and bravery.  The FSB confirmed the ‘neutralisation’ of its number one terrorist enemy, Doku Umarov, but did not give any concrete support to reports that he has been killed.

PHOTO: People are reflected in a shop window near a portrait of Russia’s President Vladimir Putin in the Crimean city of Simferopol April 8, 2014. REUTERS/Maxim Shemetov