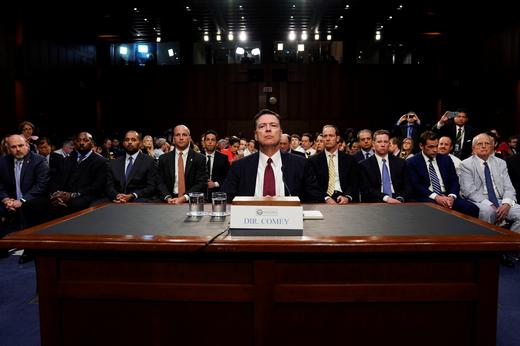 TODAY: Putin meets with Chinese counterpart on sidelines of SCO summit, which is more important than Comey testimony, says Peskov; climate risks threatening millions, but adaptation is slow; offices of organisation for prison inmates searched and raided; developers told they can contract but not co-invest in giant Moscow demolition plan; Lavrov the chainsmoker cuts down.

President Vladimir Putin met his Chinese counterpart Xi Jinping yesterday on the sidelines of the Shanghai Cooperation Organization (SCO) summit; both sides hailed close strategic ties of “great global significance”. The Kremlin has no particular interest in the testimony of former FBI Chief James Comey in the US Senate, because there are more pressing things of note and relevance, including the SCO summit, says spokesman Dmitry Peskov. 10 million Russian citizens are facing immediate climate-related risks, according to a new report by Russian researchers, but climate adaptation strategies are limited and slow-moving. In an excerpt from the Oliver Stone documentary “The Putin Interviews,” Putin says that “environmental deterioration” and nuclear weapons stockpiles are “the real threat to all humanity”. Vladimir Putin’s approval rating currently stands at 81%, and his credibility rating at 48.1%. Authorities searched and seized financial documents from the Moscow headquarters of Res Sidyashchaya, a human rights organisation that advocates for prison inmates.

Russian developers hoping to be able to co-invest in Moscow Mayor Sergei Sobyanin’s unpopular $50 billion housing demolition plan have been told that they will only be involved as contractors. A court in St Petersburg has charged the head of the city’s branch of the Church of Scientology with participation in an extremist community, and ordered him to be held in detention for two months. Ukraine’s Naftogaz is happy to attend talks with Gazprom on their ongoing legal dispute provided the negotiations are not held in Russia, calling it “an unacceptable location“. Bloomberg evaluates Central Bank head Elvira Nabiullina’s potential to reach her inflation target.

The Foreign Ministry says that Sergei Lavrov is no longer a chain smoker. He smokes a couple of cigarettes a day, making his habit “more like a tradition than a daily necessity”. Kremlin spokesman Dmitry Peskov will not comment on a proposal to introduce the death penalty for terrorists.