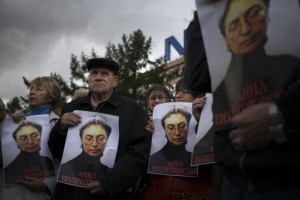 The second phase of the Nord Stream pipeline is now in operation – chief Alexei Miller commented on the ‘symbolism’ of its beginning full capacity on Vladmir Putin’s birthday.  Despite the pipeline’s new doubled capacity, gas volumes have not changed, and demand has not increased.  Following his visit to Russia, the Kyrgyz Foreign Minister, Erlan Abdyldaev, has announced that Kyrgyzstan will join the Russia-led customs union with Belarus and Kazakhstan.  Opposition leader Sergei Udaltsov has been summoned for questioning over allegations that he conspired to launch a revolution, after state-run NTV broadcast allegedly secretly-filmed footage of him meeting a Georgian politician.  New polls from the Levada Center indicate that public support for large opposition protests is slipping.  ‘Today a grave and gross error of judgement is taking place with Radio Liberty.’  Yabloko’s candidate for the role of Governor in Bryansk has withdrawn from the race.  Masha Gessen remembers Anna Politkovskaya.

Former Finance Minister Alexei Kudrin says he has been offered a role to head a new regulator to oversee the financial markets, but is not revealing the details.  Mobile phone operator MegaFon has announced plans to launch a London IPO.  BP’s Russian partners in TNK-BP say they are willing to sell their share of the company.  Foreign Minister Sergei Lavrov believes that Europe is delaying making a final decision on visa agreements with Russia for political reasons.  According to the World Bank, the Russian economy is expanding at its slowest rate in 15 years (not including recessions).

Under new, tougher drink driving laws, even a glass of kefir could incriminate a driver.  Evgeny Lebedev remembers his Soviet childhood.