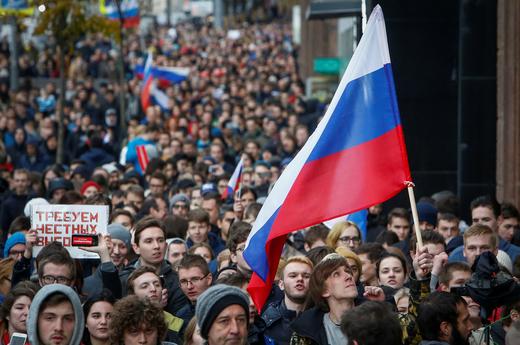 Protesters gathered all over Russia over the weekend to mark President Vladimir Putin’s 65th birthday, despite last week’s government warnings of a harsh crackdown. Demonstrations were held in Moscow (around 1,000 gathered), St Petersburg (1,500), Yekaterinburg, and Krasnodar. RFE/RL has video of protesters gathering in Vladivostok; Reuters says that the numbers of protesters overall were much smaller than in previous rallies this year, and noted one particular home-made banner which featured an image of Putin sitting on a pile of banknotes with the caption “Happy Birthday you little thief!” The Moscow Times live-blogged the day. Many protesters apparently expressed support for opposition leader Alexei Navalny. Official detention numbers were 136, but other sources counted as many as 270 arrests. Authorities said that all those detained have already been released; 60 of those detained will have to make court appearances, and 71 detentions carried charges for administrative offences. A smaller group of about 300 protesters spent the night in Manezhnaya Square. An investigation has been opened in St Petersburg after rallies caused traffic problems that delayed an ambulance, thereby causing a death.

A wave of bomb hoaxes has caused over 20,000 Muscovites to be evacuated from buildings across the city since September 10. Putin chaired a meeting of the Security Council focusing on Syria and the upcoming CIS summit. The Washington Post profiles Lyudmila Savchuk, the woman at the head of the movement to expose her former employer the Internet Research Agency, one of Russia’s so-called “troll farms”. HIV/AIDS patients in Russia are networking to get the treatments they need, given issues and complications with state distribution.

Saturday not only marked Putin’s birthday, but the 11th anniversary of the killing of journalist Anna Politkovskaya. Turkish President Recep Tayyip Erdogan congratulated Vladimir Putin on his birthday and praised his “important contribution” to Russia’s prosperity. Prime Minister Dmitry Medvedev is building ties with Algeria today and tomorrow.