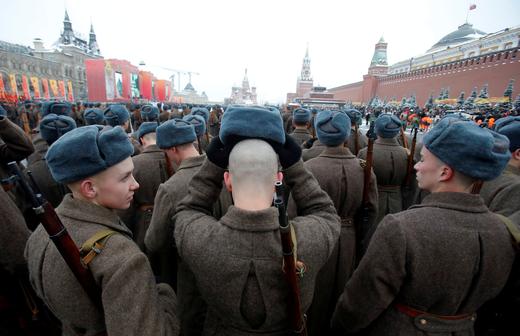 It is expected that Moscow will be launching large-scale bombings on Aleppo over the next 24 hours whilst America is distracted with the results of yesterday’s vote.  As Russian state-run media runs ‘blanket coverage’ of the US election, RFE/RL asked Muscovites for their opinions on the candidates; more than one respondent said that Hillary Clinton is ‘not healthy’; one woman said she would be better off ‘pleas[ing] her husband’. Most believe that Donald Trump would be better for Russia and improve the diplomatic relationship between Russia and the US.  The New York Times meanwhile is looking forward to a post-Putin Russia.  Sberbank, Russia’s top lender, keeps $10 billion on Western financial markets.  The European Union has added six recently elected State Duma deputies, all from Crimea, to its sanctions list, bringing the total number of sanctioned individuals to 152.

Igor Kalyapin, a member of the Kremlin’s human rights council, requested that activist Ildar Dadin (who claimed he was tortured and beaten in prison) be moved to a different prison facility, due to high tensions between him and the prison guards.  It was reported however that Dadin refused the offer of a transfer, because he does not want to leave his inmates.  Journalist and activist Roman Dobrokhotov writes about a recent wave of email hacking attempts on Russian dissidents by the group Fancy Bear. ‘[W]ith every passing year, journalists, activists and NGO workers are getting more and more informed about questions of cyber security.’  German Chancellor Angela Merkel proposed that Russia could try to influence Germany’s elections next year through cyber attacks.

Japan is reconsidering a previous plan to build a $6.7 billion natural gas pipeline from Russia’s Sakhalin island to Tokyo, possibly as a welcoming gift to Vladimir Puitn, who arrives next month, as the two countries work towards improving relations.  Lukoil is prepared to freeze output, if OPEC can agree on such a measure later this month.  The company says it has no interest in buying any shares in Rosneft; at this point it looks likely that Rosneftegaz will help Rosneft finance its own share buyback.

PHOTO: Servicemen dressed in historical uniforms wait before a military parade marking the anniversary of the 1941 parade when Soviet soldiers marched towards the front lines of World War Two, in Red Square in Moscow, Russia, November 7, 2016. REUTERS/Maxim Shemetov