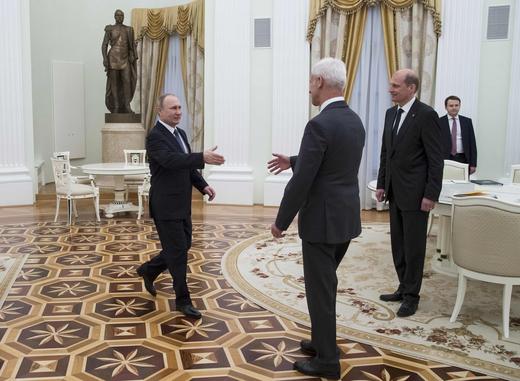 The Baltic states are urging NATO and the U.S. to take additional security measures ahead of a large Russian military exercise scheduled for later this year.  U.S. troops are currently locked into a Russia deterrence strategy in Lithuania, which was passed immediately after the election of Donald Trump, as it was expected that Trump would attempt to put an end to more deployments in Europe.  President Vladimir Putin has not been invited to this year’s Group of Seven summit.  Kremlin spokesman Dmitry Peskov spoke out against anti-Russian sanctions, calling them ‘rather destructive and harmful to both sides’.  The US State Department published a research paper arguing that anti-Russia sanctions are successfully ‘depriving targets of revenue and resources’, but that the drop in oil price has been far more harmful to the economy as a whole.  Twelve protesters were arrested outside of Rosneft’s Moscow offices for distributing leaflets about CEO Igor Sechin’s ‘extravagant income’ (he apparently earned $16 million last year).  The European Union says the trial of Alexei Navalny is politically motivated.

The Foreign Ministry refuted a report on Syria by Amnesty International, which had alleged that executions were carried out by the Syrian government at Saydnaya Prison, calling it a provocation, and ‘fake’.  Russian air strikes in Syria accidentally killed three Turkish soldiers.  Russia and the Trump administration are not going to negotiate on a deal for Ukraine, says Dmitry Peskov.  The Economist destroys the notion that Russia would be a good ally against China. ‘Russia is far weaker than China, with a declining economy and population and a smaller army. Mr Putin has neither the power nor the inclination to pick a quarrel with Beijing.’

This piece discusses why Russian agents are so fond of using poison against Kremlin critics.  Grassroots activist movements are arising in Sibera in response to allegations of abuse by prison officials.  Ukrainian library Natalya Sharina, under house arrest in Russia since 2015, has taken her case to the European Court of Human Rights.  United Company Rusal is plotting a significant share sale of as much as a 20% stake.