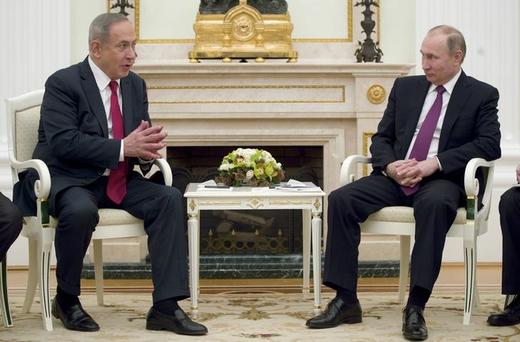 President Vladimir Putin continued his personnel reshuffle by dismissing 10 senior law enforcement officers, including top officials from the Interior Ministry, the Investigative Committee, and the Federal Penitentiary Service. No explicit reason was given for the dismissals, although Putin did say that officials need to do a better job at problem-solving. Putin held three high-level meetings yesterday: the first, with Israeli Prime Minister Bejamin Netanyahu, to discuss Syria (Israel says peace in Syria is impossible with an Iranian military presence there). Putin tried to appease the German Foreign Minister Sigmar Gabriel at their Moscow meeting, saying he is committed to fully normalising ties with Germany. During his visit, Gabriel warned of the dangers of a new arms race with Russia, and spoke of his concerns about violence in eastern Ukraine. Putin also met with ExxonMobil CEO Darren Woods, although no details have yet been released. ‘Peskov declined to specify whether the corporation had reaffirmed its plans to carry on the projects in Russia, which it implemented when Rex Tillerson, the U.S. Secretary of State in the Trump Administration, held the position of the CEO.’ The Moldovan government is warning its officials not to travel to Russia, due to alleged humiliation and harassment by Moscow security officials, which it says are retaliation for its investigation into a $22 billion money laundering scheme.

The Kremlin is considering matching the presidential election date with the anniversary of the official annexation of Crimea. The Kremlin rejected U.S. accusations that it violated a nuclear arms control treaty. Jon M. Huntsman Jr. (who was the U.S. ambassador to China in 2009) has been confirmed as the new ambassador to Russia. Russia has blocked more than 3,000 websites for extremist content.  Yelena Isinbayeva, the Olympic pole vaulting champion and the new head of the anti-doping board for Russian sports, says she will make Russia’s anti-doping system independent and transparent.  Norwegian journalist Thomas Nielsen is banned from entering Russia for five years as an ‘undesirable’.

This piece focuses on the female activists who are fighting the recently-passed law decriminalising domestic abuse.  The Orthodox Church is to begin celebrating St. Patrick’s Day.