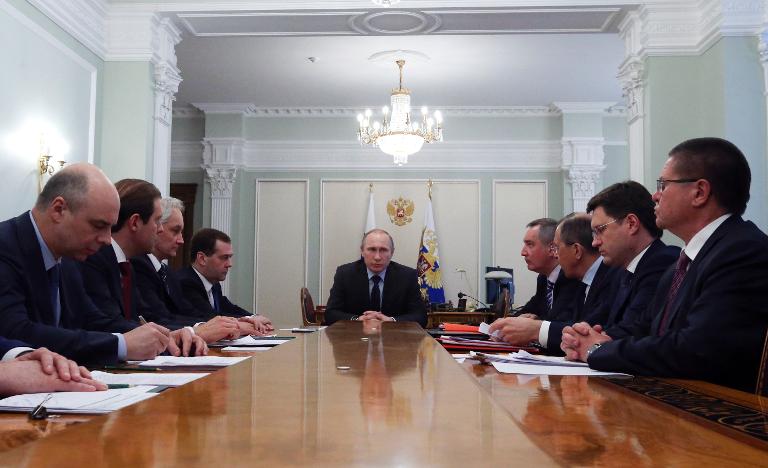 Russia says Western concerns over its military presence on its shared border with Ukraine are ‘groundless’, and insists that it poses no threat: ‘Russia has said several times that it is not conducting any unusual or unplanned military activity on its territory near the Ukrainian border.’  Political analysts and Kremlin allies agree, saying that Russia’s plans for Ukraine are more subtle than invasion, and constitute a long-term aim to keep the country under its economic and military influence. ‘A federal structure will ensure that Ukraine will not be anti-Russian.’  Kiev has promised to expel pro-Russian protesters from its government buildings today if they will not leave voluntarily.  Prime Minister Dmitry Medvedev’s suggestion that Gazprom shift to an advance payments system for Ukraine’s gas supplies was blocked by Vladimir Putin; Ukraine has halted its natural gas imports from Russia, citing Gazprom’s ‘aggression’ and saying that it will not resume receipt of deliveries until a price agreement is reached.  Europe says it is beginning to put together new measures to reduce by $18 billion its natural gas imports from Russia by 2020.  The crisis in Ukraine is forcing Russia to look eastwards, says Bloomberg, as Gazprom and China come closer to reaching a ‘landmark’ 30-year gas deal that is expected to be signed in May once prices have been agreed.

Putin is increasing economic pressure on Ukraine by telling his cabinet to seek substitutes for Ukrainian imports, having already banned dairy imports from six companies.  He says he has high hopes for next week’s high-level talks to resolve the Ukraine crisis, but warned Kiev in the meantime not to do anything that could not ‘be fixed later’.  Until then, U.S. and Russian diplomats have taken their war of words to Twitter, says The Guardian.  Russian steelmaker Evraz posted 2013 losses of $572 million, warning that the Ukraine crisis could make business more difficult.  Polyus Gold is considering delisting from the London Stock Exchange to protect against Western sanctions.  Bloomberg explains the potential issues.

The Finance Ministry is investigating state-owned Vnesheconombank for alleged money laundering.  The U.S.-funded radio station Voice of America has been blocked by Russia, as Dmitry Kiselyov called it ‘spam on our airwaves’ that is as if ‘broadcast from the underworld’.  The Kremlin apparently declined to give information to the FBI that would have led to more extensive scrutiny of one of the Boston Marathon bombing suspects long before the attack.