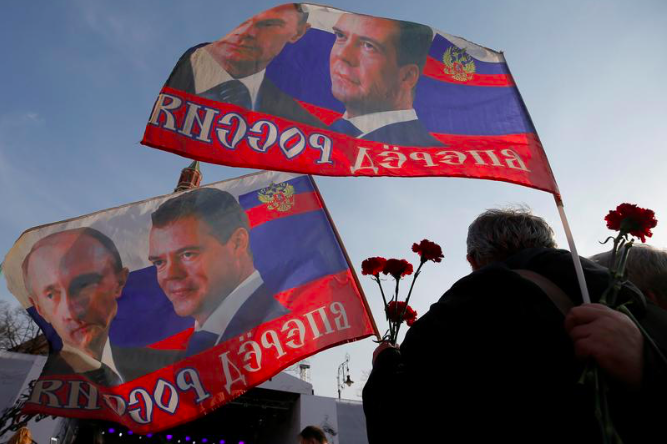 US Secretary of State Rex Tillerson accused Russia of being “incompetent in its ability to deliver” on its obligations under a 2013 agreement to strip Syria of chemical weapons and thus by proxy bearing the responsibility for the civilian deaths in Syria in last week’s poison gas attack. He blamed Moscow’s sponsorship of Syria’s “murderous regime” for the diplomatic escalation of the situation, after the US fired missiles at a Syrian air base last week. (At least Trump can’t answer to the nickname “Russian Puppet” anymore, notes the Inquisitr.) The Chairman of the Duma’s lower house, Vyacheslav Volodin, said the US could face “ominous consequences” for acting in ignorance of international law. Russia’s naval activity in Europe exceeds Cold War levels, according to a top NATO military officer. A recent surge of Russian activity in Nicaragua is stumping security analysts. The US State Department spoke out against the detention and murder of gay men in Chechnya.

Prime Minister Dmitry Medvedev slammed Donald Trump for exaggerating his campaign promises beyond the bounds of decency with the Syria strikes, declaring that “the last of the campaign fog has disappeared”. To Russia, “the Trump administration, for which it had such high hopes, [i]s now like every American administration in recent memory: using the guise of human rights to circumvent the UN and intervene against what Russia considers legitimate governments,” says The Atlantic. The German Foreign Minister says it is impossible to resolve the Syria conflict without Russia, but he believes that “Russia will not always protect Assad”. Trump’s son-in-law, Jared Kushner, failed to disclose contacts with top Russian officials when he applied for a security clearance this year. British Foreign Secretary Boris Johnson’s cancellation of his visit to Moscow later this month shows a lack of understanding of events in Syria, the Russian Foreign Ministry said. It added that the UK has “no real influence” internationally, nor “their own position on the majority of current issues”.

Yandex insists that the strange disappearance of a story about last month’s widespread anti-corruption protests was due to an algorithm, rather than manual censorship. At least 50 people were injured after a commuter train crashed between Moscow and Brest, derailing at least four carriages. Russian computer programmer Pyotry Levashov has been arrested in Barcelona, but it is not as yet clear why.  Some Russian doctors are currently making less than managers at McDonald’s.

PHOTO: People gather for a memorial to pay tribute to the victims of the St. Petersburg subway blast. (Maxim Shemetov / Reuters)