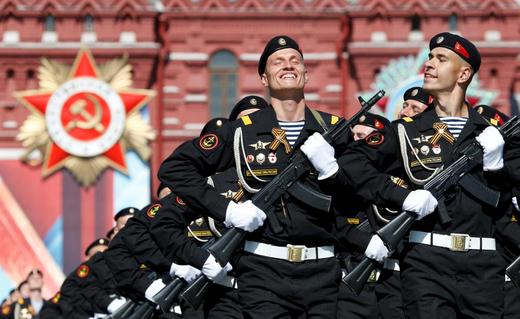 Russia’s Victory Day celebration for the 71st anniversary of the Soviet Union’s victory in World War II was characteristically full of pomp, ceremony, and the usual exhibition of its military might, with ten thousand soldiers marching through Red Square for the annual grand parade, and a parade of new military vehicles and hardware, including an air defence missile system, watched over by President Vladimir Putin, who took the opportunity to slam the West for ‘unacceptable double standards’.  In addition, Putin led a public ‘Immortal Regiment’ procession of ‘several hundred thousand people’ (500,000 by police estimates) through Moscow.  A smaller parade was held in the Crimean port of Sevastopol.  The Defence Ministry says its barrel rolls near US Air Force plans over the Baltic Sea (with three such incidents occurring in the past month) are a response to US planes flying near Russian borders.

Provincial Russians who live outside the major cities are those most affected by the drop in oil prices resulting from sanctions imposed after the annexation of Crimea in 2014, but Putin remains popular, with most blaming the situation on regional authorities or the West.  An annual survey by YouGov ranks Putin as the sixth most admired man in the world, two places ahead of the Dalai Lama.  Moscow authorities have removed the latest improvised memorial for Boris Nemtsov and detained the two people who were watching over it during the night.  Dmitry Vorobyevsky, an opposition activist known for taking part in anti-Kremlin protests has been forcibly removed from his home and admitted to a psychiatric hospital in Voronezh.  VTB bank has moved $3.7 billion worth of toxic assets held by its subsidiary Bank of Moscow to a specially created ‘bad bank’, and is not expecting a return.

Pussy Riot member Nadezhda Tolokonnikova is looking for financial backers for her criminal-justice-focused news website, with the aim of making it a serious contender for Russia’s state-run news sites. ‘The real punk is to build institutions,’ she said.  The Guardian investigates about the now 92-year-old project of keeping Vladimir V. Lenin embalmed.  Russian biker gang the Night Wolves are ‘a powerful force for whipping up pro-Kremlin sentiment’ and are patronised by the President, says the WSJ.  The World Anti-Doping Agency will investigate ‘disturbing’ new allegations against Russian Olympic gold medalists.

PHOTO: Russian servicemen march during the Victory Day parade, May 9, 2016, marking the 71st anniversary of the Soviet Union’s victory over Nazi Germany (REUTERS)