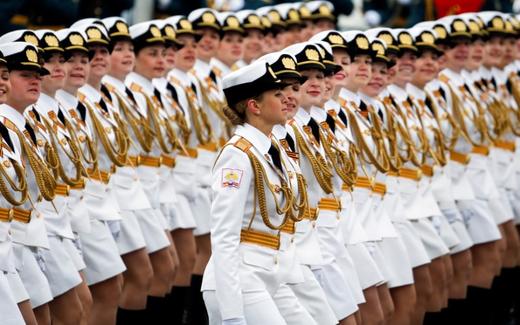 At the Victory Day parade on Moscow’s Red Square, marking the 72nd anniversary of the Soviet Union’s WWII victory, President Vladimir Putin grandly stated that “There is and there will be no force that could conquer our people.” Kremlin news organs carried a raft of nationalist pride stories, including positive polls about the patriotic Immortal Regiment marches (reportedly attended by 600,000 people) Putin’s popularity, and a successful government development program. The parade featured an array of tanks and new Arctic missiles. The air force flyover was canceled due to bad weather. The New York Times describes this year’s parade as “rather subdued”, noting the almost total lack of foreign leaders in attendance (just one this year, down from dozens in 2005). “Despite Mr. Putin’s call for cooperation, the parade served as a reminder of just how isolated Russia has become.” Leonid Bershidsky said Putin’s Victory Day speech “sounded like a lonely man shouting in a desert”, and that his time of geopolitical wins has run out. Islamic State had its own gruesome Victory Day propaganda for Moscow.

A Dutch appeals court ruled that Russian authorities knowingly bankrupted oil giant Yukos in 2006 by forcing it to pay huge tax bills, and that the bankruptcy could not be recognised under Dutch law. Darya Kulakova, a 23-year-old activist who was jailed for orchestrating a letter-writing campaign to President Putin urging him not to run for a fourth term, has been released after completing her 10-day sentence. Following treatment in Barcelona for a chemical attack in Moscow, opposition leader Alexei Navalny says his vision will be restored in a few months. US Democrats are speculating that President Donald Trump’s firing of FBI head James Comey was the result of his investigation into Trump’s ties to Russia.

Brian Whitmore traces the roots of the term “Russophobia” back to the 19th Century. The Moscow Times discusses the secrecy of Vladimir Putin’s whereabouts. The Guardian talks to Pussy Riot member Maria Alyokhina.